Dr. Ben Carson Takes To Fox To Address His Critics, Blast ObamaCare, And ‘Stand Up To The Bullies’ 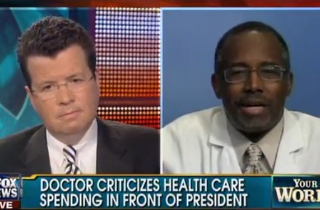 Newfound conservative hero Dr. Benjamin Carson appeared on Fox’s Your World this afternoon to respond to his detractors who’ve called his National Prayer Day speech before the president “inappropriate” and “offensive” given the apolitical nature of the event.

Asked how the president initially reacted to the speech, Dr. Carson told host Neil Cavuto that Obama “came over to me and said he appreciated my speech and he admired me and took my hand and didn’t squeeze too hard.”

“What do you mean? One of those fishy hand shakes?” Cavuto inquired.

“It was a good handshake,” Carson replied.

Cavuto asked the doctor, who came dressed in a white lab coat, to address his critics who’ve accused him of using the event to “showboat” before the president. “What we need to do is we need to be able to discuss intelligent ways of solving the multitude of problems that threatens to destroy our nation,” Carson said, “and there are a group of people who would like to silence everybody and have everybody go along to get along, but that’s not going to be very helpful for news the long run.”

He added: “Somebody has to be courageous enough to stand up to the bullies.”

“Why did you take [your speech] to go beyond medical policy and talk about tax policy?” Cavuto pressed, prompting Carson to say:

“One of the things I also said during the speech, there will be some people who will say, but you’re a doctor and you’re a surgeon. You should be sticking to that. And I mentioned the fact that five physicians signed the Declaration of Independence and were involved in the framing of the Constitution and the Bill of Rights and several other things. There’s absolutely no reason at all that physicians, scientists, shouldn’t be involved in things that affect all of us. We’re people who have learned how to make decisions based on facts, empirical data, rather than on ideology, and one of the geniuses — one of the real things that made us a great nation — is that we brought people from all backgrounds into the legislative process.”

The doctor also noted that people don’t often ask why lawyers get involved in “this that and the other,” so he doesn’t understand why they would say it to a well-educated physician like himself. “I have advocated a tax policy that comes from the Bible,” Carson continued. “If it was good enough for God, why wouldn’t it be good enough for us?”

Asked for his “gauge” on the medical community’s reaction to ObamaCare, Carson said: “I know a lot of doctors. I work with a lot of doctors, and I didn’t find a lot of support for it. I find a lot of people who were really quite disappointed. … It’s an expansion of the bureaucracy. You need a patient and a doctor. Along comes the middleman to facilitate the relationship and it has become this mammoth creature that completely controls everything. And isn’t really even necessary.”

Cavuto then brought up that many have called for Dr. Carson to consider a 2016 presidential run. “I’ve had people telling me that for many years now,” the physician said. “If i had a nickel for everybody who told me that, I could finance a campaign. … I’ve always said if god grabs me by the collar and sticks me in that arena, that’s the only way i’ll do it.”

The doctor then took the time to announce that he plans to retire from surgery in June to focus on teaching and “getting the populace back to where it used to be … because an uneducated populace will fall for anything, and if you go and talk to most people, they mean well, but they don’t have much of a breadth of education, of knowledge, of understanding what the issues are, and therefore they listen to pundits on television who tell them what they’re supposed to think, and they keep repeating that and pretty soon they say, oh, well, that must be true.”

“I assume you’re talking about other pundits, doctors,” Cavuto joked before ending the segment.