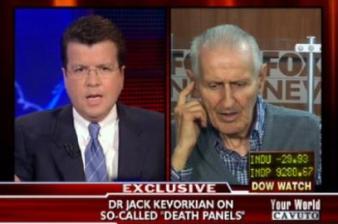 Sometimes the word “exclusive” gets thrown around too loosely in TV news, but yesterday on Neil Cavuto‘s 4pmET program he had a real (and really long) exclusive interview with Dr. Jack Kevorkian, AKA Dr. Death.

The 30-minute interview touched on a variety of topics, but when you can get Dr. Death to talk about the “Death Panels” – that’s going to be the highlight.

And what does the notorious assisted-suicide Doc think of the supposed assisted-suicide panels? “They have no right to say that,” he tells Cavuto after the Fox host sets up a hypothetical. “He’s got to have a legitimate medical reason, not just being old.”

If a patient consults with a doctor who’s opposed to what he wants, than he’s at the wrong place. A doctor has got to have a completely open mind because the patient is what counts, not the doctor’s feelings. That’s why Catholic doctor’s don’t consult with some people.

Cavuto was calm and patient throughout the entire interview, as was Kevorkian, while he talked about religion, his feelings on “life” and more. Because of the calm tone, the discussion was notably different than many cable “death panel” segments. It was also an interesting “get” – because Kevorkian is not your typical cable news interview subject. On one hand, he had his finger in his ear touching his IFB earpiece for the majority of the interview. But also, he said things that surprised – surprised the audience, and certainly surprised Cavuto.

I was 10 or 11 years old, and I said, is it worth going through all this? No. And all my life I said if I had a choice I would have been chosen not to be born. What’s wrong with that? There’s no misery.

Here’s part 1 of the interview: