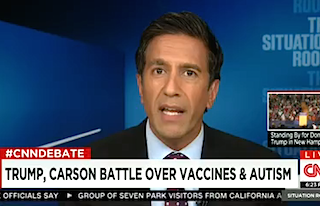 The disproven myth that vaccines cause autism reared its ugly head again during last night’s Republican debate when Donald Trump, who has a long history of promoting ant-vaxxer theories, repeated those claims to the 23 million people watching at home. But even though there were two medical doctors on stage with Trump, his baseless views went relatively unchallenged, a fact CNN’s Dr. Sanjay Gupta lamented on Thursday afternoon.

“There is no connection between vaccines and autism and I’ll just pause there for a second because I don’t want anybody to think there are strings attached to that statement,” Gupta told Wolf Blitzer after watching the clip from the debate. “There is just no connection, there hasn’t been. There was a study done earlier this year, one of the largest, 96,000 children, they looked at their history of vaccinations for correlation with autism and it simply doesn’t exist.”

While Dr. Ben Carson did softly echo this fact in response to Trump during the debate, he appeared to agree with the candidate that stretching vaccines out over time was a good idea. Similarly, Dr. Rand Paul briefly denied the autism link but the then proceeded to stress that he supports parents’ “freedom” to vaccinate their children as they see fit.

Gupta called it “potentially dangerous” to spread vaccinations out over time, saying, “when you spread them out, you’re defeating the purpose of the vaccines in the first place.” Asked if he was “surprised” that Carson, who is a pediatric neurosurgeon, “effectively refused to correct” Trump in the exchange, Gupta said he was.

“I think it’s imperative, actually, for Dr. Carson, Dr. Paul who is also a doctor, an ophthalmologist, to just be clear on this, because I think it borders on dangerous to suggest in any way that there is a link to autism,” he continued. “These are preventable diseases and as far as the link to autism, it’s just not true. People need to say it, be clear about it and not equivocate.”