Dr. Zbigniew Brzezinski: There Should Be A List Of Very Wealthy Who Do Not Give To Charity 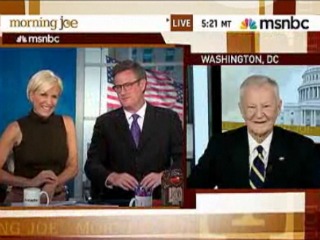 In his acceptance speech, as his daughter noted, he opined that the United States is becoming “a country of socially ominous extremes between the few super rich and the increasingly many who are deprived.” One source of the frustration among the American people, as Dr. Brzezinski sees it, is the “mystery” surrounding the way our economic system and the great, instantaneous flow of money works. He believes this frustration, coupled with an increasingly “fragmented” and “powerless” government, will eventually result in an era of worldwide socio-political unrest. Interestingly, he refers to the “Occupy Wall Street” movement — which has spread from lower Manhattan to other cities and counties — as “riots.”

He also offered an idea on how to apply public pressure to the very wealthiest among us:

You know, I’ve been looking at these worldwide riots that are developing. They’re all a reflection of deep passion, deep resentment and fear. Now the question is “Where will this go? How can this be sort of concretized?” And one thought that has occurred to me — and let me sort of mention it here casually without having really thought it through systematically — I think it would be increasingly helpful if there was a movement to publish, worldwide, lists of who make, largely through speculation, enormous amounts of money almost instantly, and basically hide the fact from their social context. You know, how many Americans are really fully aware of how many other good people, let’s say like Warren Buffett and others, who really donate a lot of their earnings to charities, to philanthropy? But how many more are there in the hedge funds, in the banks, in a variety of other places, who, on the basis of speculation, literally make millions of dollars that would take a century or two for the average person ever to make? I’d like to see those lists. And they shouldn’t be that difficult to produce.

It’s funny how we’ve all grown up with the concept of “giving back,” perhaps without fully realizing the implication of that term. Give back? To whom? Does this mean that one’s earnings are forever borrowed and never really one’s own? That one’s wealth belongs, ultimately, to the community in which it was cultivated?

Have a look, courtesy of MSNBC. Dr. Brzezinki’s comments about the list occur around the 5:16 mark: