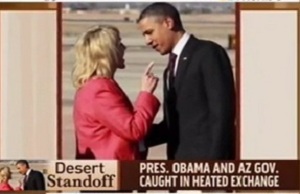 Arizona Gov. Jan Brewer‘s finger-pointing tarmac confrontation with President Obama is the hot story of the day, and while the media treats this as a he said/she said affair, it might be a good idea to put Brewer’s account into context. She told reporters, among other things, that she “felt a little bit threatened, if you will, in the attitude that he had.”

The central dispute here, her 2010 White House meeting with the President, demonstrates Brewer’s tendency to embellish her recollections for dramatic effect.

Gov. Brewer and President Obama had words on the tarmac yesterday over a passage in Brewer’s book, Scorpions For Breakfast (which is not a tale of hair-band groupiehood), and while cable news has splashed a photo of Brewer pointing her finger in the President’s face as if she were scolding a small child, she insists she was as nice as kitten pie. “I was not hostile,” Brewer told reporters. “I was trying to be very, very gracious. I respect the office of the president, and I would never be disrespectful in that manner.”

She went a step further, though, painting a menacing picture of the President. “I was in the middle of a sentence and he walked away. I wasn’t angry at all. I felt a little bit threatened, if you will, in the attitude that he had.”

RELATED: Gov. Jan Brewer Doubles Down On President Obama: ‘I Thought He Was Pretty Thin-Skinned’

Threatened? What is there about President Obama that a person could find “threatening,” particularly in broad daylight, under the watchful eye of cameras? And what could compel a high elected official to gesture at a sitting president so disrespectfully?

Here’s a clip of Gov. Brewer describing the incident, via CNN:

The White House released the following statement about the incident:

“The governor handed the President a letter and said she was inviting him to meet with her. The president said he’d be glad to meet with her again, but did note that after their last meeting, a cordial discussion in the Oval Office, the governor inaccurately described the meeting in her book.”

Now, when weighing the credibility of Brewer’s account, it’s instructive to look at that 2010 meeting. After initially turning down the meeting, the White House (perhaps unwisely) accommodated Brewer’s request for a meeting. While the President and the Governor obviously disagree on the immigration issue, they appeared to agree on the tone and productivity of the meeting. Here’s the White House’s readout of the meeting, and here’s Gov. Brewer speaking to reporters minutes after that June 3, 2010 meeting:

It’s understandable, then, that the President would be “disenchanted” with Brewer’s completely different account of that meeting in her book. I’m not saying that Brewer’s lying, exactly, but rather, that she has a flair for the dramatic, and that the President Obama threat level was probably about as real as those headless bodies Brewer talks about.

This isn’t the first time the President has been burned by a Republican grandstanding about a private meeting on immigration. A few weeks after Brewer’s visit, Senator Jon Kyl (R-AZ) accused President Obama of using border security as leverage to pass comprehensive immigration reform. The White House denied the exchange. Like I said at the time, perhaps President Obama should insist on taping his meetings with Republicans, if only to serve as a memory aid for them.