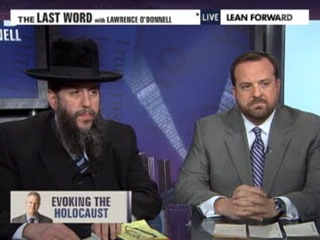 Lawrence O’Donnell strove today to prove the magnitude of the letter published today by 400 rabbis in the Wall Street Journal asking Rupert Murdoch to condemn the repeated Holocaust references on Fox News by trying to get just two of them to agree on something. O’Donnell invited Rabbis David-Seth Kirschner and Yehuda Levin to debate the issue and found himself not even being able to cut to commercial, much less reach any common ground.

Kirschner, who supported the collective move by the rabbis on this issue, noted that “this is not a question of permissibility, this is a question of sensibility,” arguing that the trivialization of such issues were offensive to him. While he ultimately clarified that he did not believe Glenn Beck, for example, was anti-semetic (“he is a strong supporter of Israel”), he insisted the language was unacceptable. He also particularly noted that Fox News president Roger Ailes‘ comments that the letter was “a partisan issue”, thus “dismissing” their concerns, was also hurtful.

Rabbi Levin had a somewhat different take on the matter– “somewhat” meaning “entirely.” Levin began his defense of Beck by noting that he was no fan of the TV host or allies like Sarah Palin, who he considered far too liberal for his tastes. “Glenn Beck, on the issue of homosexual marriage,” he noted, “is on the wrong side of the issue.” Then he read his defense of Beck et al– off a piece of paper that he notes was given to him by the Last Word crew:

The liberal left homosexual marriage-supporting, pre-born-baby-aborting, abandoning, not-kosher-eating, Sabbath-desecrating liberal rabbis have decided to use the Holocaust as a bludgeon, a baseball bat to beat and bash their right wing political opponents. This is scandalous.

To the argument from O’Donnell that the word Holocaust was too strong because it meant “literally burning Jews to death,” Levin replied that the reaction to Fox News was “the Jesse Jackson-ization of rabbis,” which then set of Rabbi Kirshner– a debate that threatened to spill into Maddow before O’Donnell abruptly ended it.

The lively dispute via MSNBC below: