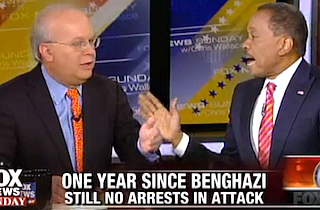 A Fox News Sunday panel erupted over whether Benghazi was a phony scandal ginned up by Republicans or a reasonable inquiry into the events surrounding the attack on a U.S. consulate one year ago this week, with Karl Rove yelling that the Obama administration had deliberated misled the American populace about the attack, and Juan Williams dismissing his and Brit Hume’s continued outrage.

“The American people have a legitimate question: why were efforts not undertaken to save our people?” Rove asked. When Williams tried to rebut this, Rove shouted: “No assets were put in motion, and as you just admitted, U.S. military on the ground in Tripoli were told don’t go to Benghazi.”

“There was no stand down order,” Williams said. “What we have is: don’t go in after the fact, when we don’t know what you’re getting into, and it could result in more American deaths.”

“You’re all in the weeds here,” Williams said, as Rove continued to scream over him. “You continue to prosecute this like there’s some huge crime. Stop living in the past, and trying to get after Susan Rice or whoever. This has nothing to do with Ambassador Stevens.”

“You may be comfortable with the American people being told a deliberate lie by the administration, but I’m not, and I think we need to get to the bottom of it,” Rove said.

“The list of questions that remain unanswered to this day are what make this still a legitimate conversation,” Brit Hume said in his calm baritone. “Juan, I’m sorry to say, this is simply not over.”

“It’s gone baby,” Williams said, as the panel cracked up. “It’s in your head. That’s about the only place.”