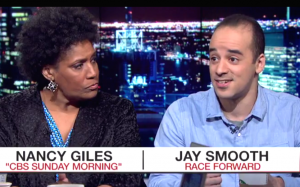 Last night, a panel on All In with Chris Hayes became the ultimate example of how awkward the results of Starbucks’ #RaceTogether campaign could be.

While the entire debate was filled with substantial criticism about the premise of the campaign — was this the proper way to address real racial issues in America? Would this actually address systemic issues and challenge people’s assumptions? — it suddenly stopped being a well-produced television segment roughly five minutes in, and became a real, authentic race discussion, complete with accidental stereotypes.

Chris Hayes showed a video of panelist Jay Smooth‘s YouTube lecture, “How to Tell Someone They Sound Racist”, and fellow panelist Nancy Giles joked about the “brotha way he was trying to talk” in the video.

“Yeah, I know, but it’s another interesting, funny thing about race. Like, there would be some people that feel that you co-opted something like that, and other people might feel like that’s his background and that’s really cool, too,” Giles replied, poking fun at his impersonation of a black guy.

“It’s also interesting because I’m actually black, but you assumed otherwise,” Smooth replied. “And this is the sort of awkwardness that we can look forward to at Starbucks across America.”

To her credit, Giles immediately pointed out that her assumption was the kind of thing that race discussions led to, and Hayes broke into hysterical laughter in the background.

While we’re aware that Starbucks wanted to catalyze a vigorous debate on race — and, if this debate is anything, they’re getting it — we’re pretty sure they didn’t want the debate to focus on whether their campaign was dumb or not.