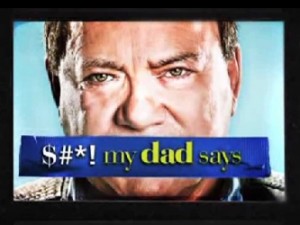 When CBS’ new series $#*! My Dad Says — a show already being called the best series based on a Twitter account and starring William Shatner ever — premieres tonight, some viewers are are going to have a hard time watching the Shatner-filled shenanigans. That’s because some DVRs are incapable of locating the show due to its unusual title. CBS has even been forced to release a guide on how to record it in these cases.

For those of you who aren’t familiar with the popular and funny original Twitter page (and have never read a comic book ever), the strange punctuation marks in the title represent a naughty word. While they enabled CBS to keep the potentially offensive name and plaster ads for the show in every single subway stop I’ve entered in the past month, they’ve also created this unforeseen DVR complication.

“It turns out that the search tools on some DVRs cannot find the new show, ‘$#*! My Dad Says,’ because the symbols cannot be read. (Maybe some DVR developers could not foresee a world where TV shows would have a dollar sign in the titles.) Before the show’s premiere on Thursday, CBS released a viewers’ guide of sorts on Wednesday to help people program their DVRs accordingly.

The case illustrates how some TV networks have embraced the DVR, though tepidly. Despite the commercial-skipping abilities of the recording devices, highly rated shows become even more so when DVR playback is included in the Nielsen ratings that help determine prices for advertising time. About 38 percent of households now have DVRs, though the vast majority of programming is still watched in real-time.

‘Obviously, our first choice is that you always watch everything on CBS live; however, we also consider the DVR our friend,’ CBS wrote in its viewers’ guide on Wednesday, which was shared on CBS.com, on Twitter and elsewhere online.”

While CBS says they’re OK with DVR, this development could be the perfect way to get people to stop fast forwarding through commercials! Think about it, symbol-filled names could be the sought for DVR killer! If this is a success, don’t be surprised if next season is filled with titles more unpronounceable than Prince’s old name. Also, sort of sounds like an invitation to make this show available online…the Internet has very little problem with funny words.

To read more about the situation and the begrudging relationship between networks and DVRs, check here. To read CBS’ viewers’ guide on the problem, check here. And, if you’re curious if it’s possible to make a good TV show out of a Twitter page, you might want to check this review here.