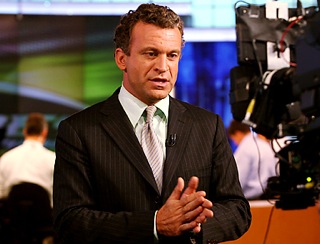 After the New York Times broke the news of his departure yesterday evening, MSNBC host Dylan Ratigan posted an explanation of his leaving and what the future brings for him after the show. In a letter to fans on his website, Ratigan explains that he is off to “experiment” in the market to “seize new tools and take cultural risks to resolve our challenges.”

RELATED: Dylan Ratigan Out As A Host At MSNBC

“I left a fifteen year career in financial journalism amid the crisis of 2008,” Ratigan explains in his letter, “I did this to join the traditional cable news ranks with a clear goal of revealing the ruthless truth about our biggest problems and telling the inspiring stories of those who are resolving them despite all odds.” Explaining that he was now going to try to act upon his “rants” and “objections to our current political process,” he cited a number of individuals who had inspired him to take on the economic challenges himself, and fix both energy and business problems, and “explore new ways to tell their stories”:

While it may seem unconventional to leave a rapidly growing political cable show on the eve of a Presidential election, to me, the timing couldn’t be better.

In fact, the thrill of an opportunity to expand new systems that cost less and give us more in every part of life is impossible to pass up. I believe if we are honest about where we are now, honest about where we want to go and honest about how we are going to get there, we may well end up as the hero of our own stories. While I don’t know exactly how my own story will develop, I hope to share some initial details with you soon. In the meantime, keep in touch.

The rest of his departure note here. Ratigan’s last program on MSNBC will air on June 22, to be replaced by Martin Bashir, who in turn will be replaced by an as-yet-undetermined program.

Watch his remarks today from MSNBC below: