Dylan Ratigan: Occupy Wall Street Is Like The Tea Party Movement Before It Was ‘Bought’ 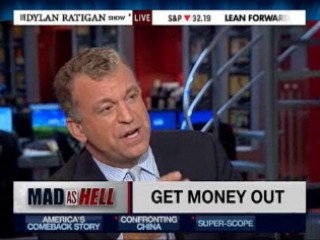 MSNBC’s Dylan Ratigan devoted part of his show Monday afternoon to the “mad as Hell” protesters demonstrating as part of the initiative to “Occupy Wall Street.” Ratigan visited the protests in lower Manhattan on Friday, Saturday and Sunday to get a closer look at the demonstrators and what it is that “the 99 percent” is trying to accomplish.

“I love what you’re doing!” he told several of those gathered, before sharing that he himself is attempting to start a debate about the “unholy alliance” between business and state. “And so my argument to you guys,” he continued, offering his own possible solution, “is that we have an opportunity to convert the energy that you’ve already harnessed into a channel, a flow of energy into next year where we can push collectively for a constitutional amendment to get the money out.” (Later on in the segment, he rather comically reveals that the protesters weren’t terribly keen on his idea.)

At one point during the weekend, Ratigan participated in the demonstrators’ general assembly meeting, where he chanted “My name is Dylan! I live five blocks from here! I think you people are crazy! I love the way you communicate! I’m here because I agree with you!”

He also made a few new friends, including, evidently, a Tea Party member from Texas. Check it out:

Later on in the show, Ratigan’s “Mega Panel” discussion eventually circled back to the Tea Party movement. “When the Tea Party emerged, I was a Tea Partier,” Ratigan shared, “and I was, like, ‘The government is screwing this whole thing up and we have to reject the ability to buy the government.'” He had also thought that Obama’s professed commitment to change would couple with the Tea Party’s “rage and rebelliousness” to enact some sort of transformation within government… and when that didn’t happen, he explained, he decided to “launch” himself into the Occupy Wall Street movement, hoping that this protest, now, finally, will lead to change.

He then took issue with a panelist’s insinuation that the Tea Party is not “genuinely organic” like the Occupy Wall Street protest. Ratigan argued that the Tea Party was indeed very organic and genuine… before it was co-opted and “bought.”