Dylan Ratigan: The Answer To America’s Woes Is ‘Obviously’ Revolution 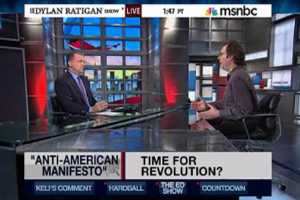 Given the polarized nature of American politics in the last several years, accusations of inciting violence on both sides have become somewhat cliched. But this afternoon, MSNBC’s Dylan Ratigan took to his show to yell fire in a crowded theater, asking viewers, “Are things in our country so bad that it might actually be time for a revolution? The answer is obviously ‘yes.'”

It’s difficult to explain the following clip without appearing to indulge in hyperbole, so it’s probably best to simply state the facts: Ratigan invites on cartoonist Ted Rall to talk about his new book The Anti-American Manifesto, and argue the case for violent overthrow of government. Quoting John Locke, Rall argues that “the people have an obligation to revolt,” and that “nothing will radicalize the American citizen more than being thrown out of their home by a bank.” Citing frustration with both parties, who he called “in bed with the duopoly,” Rall also noted that “the American left has been very peaceful since the early ’70s… and where has it gotten us?”

Ratigan did not seem particularly flustered by the proposition, though he did ask if Rall saw any alternatives, especially peaceful political dissent, or what he called “European semi-violent revolt.” “If you could get everybody to do it,” Rall responded, “it could work, but you can’t even get everyone to stop littering.”

So yes, the following clip is a discussion on cable news over the various merits of violent left-wing overthrow of the American government– signed, sealed, and delivered with a cherry on top for those on the right looking for evidence to counter the claim that it’s their side that’s doing the fearmongering. The clip via MSNBC below: