Earnest: GOP Candidates Not Denouncing Trump Because They Want ‘Those Same Votes’
video

Earnest: GOP Candidates Not Denouncing Trump Because They Want ‘Those Same Votes’ 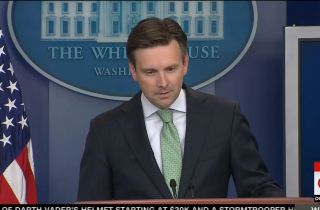 White House Press Secretary Josh Earnest blasted Donald Trump and his fellow Republican presidential candidates on Friday — the former for refusing to correct a man who said President Barack Obama is a Muslim who was not born in the U.S., and the latter for not condemning Trump.

While Trump was taking questions from the audience on Thursday night, one of his supporters said, “We have a problem in this country called Muslims. We know our current president is one. You know he’s not even an American.” He then asked about how Trump would do away with “training camps growing where they want to kill us.” The GOP frontrunner, who was one of the loudest voices doubting whether Obama was born in this country, did not correct the man on either count, and instead gave a noncommittal response.

Earnest said the other GOP candidates are refusing to condemn The Donald’s “cynical strategy” because they are “looking for those same votes.” (New Jersey Gov. Chris Christie said he would have corrected anyone who questions the president’s faith and citizenship.)

“Other Republicans have successfully used this strategy as well,” Earnest said, referring to House Majority Whip Steve Scalise‘s self-description from years ago when he called himself, “David Duke without the baggage.” But Earnest was not finished there, listing off examples of congressional Republicans acting contrary to President Obama’s legislative initiatives.

“So those are the priorities of today’s Republican Party, and they’ll continue to be until someone in the Republican Party decides to summon the courage to stand up and change it.”

Asked if Trump should apologize to Obama, Earnest said he does not think Trump is interested in his advice. Trump has given no indication that he will apologize, but his campaign responded to the controversy late Thursday night, saying that the media was misrepresenting the issue and that Trump “was referring to the need to protect Christians’ religious liberties as his previous statement says and nothing more.”

Democratic frontrunner Hillary Clinton was also asked about the incident on Friday, and said at a New Hampshire press conference that Trump encourages “hateful rhetoric.” Sen. Bernie Sanders (I-VT) called it a “disgrace.”