Ed Henry and Jay Carney Go at It Hard Over Press Access, Afghanistan 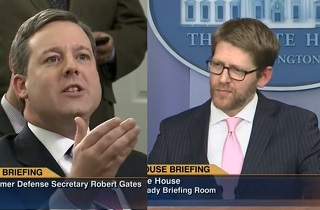 was a hot topic that served as a springboard for intense exchanges between Fox News’ Ed Henry and Press Secretary Jay Carney, on a variety of at least tangentially related topics.

One such topic was the perception of damage control, by the White House, over the book’s treatment of Vice President Joe Biden. Henry asked “why in the statement last night did the White House not refute any of the allegations against the President, but went out of your way to defend the Vice President, and analyze at least that part of the book? When you say to Chuck their relationship is great, he relies on him, we’ve heard that before. Why, if it’s such a strong relationship, do you have to go out of your way to defend him?”

After a brief back-and-forth, Carney responded that the statement was “in response to a single sentence that made a categorical statement of opinion by Secretary Gates, about the Vice President and his views that we, in that case, could say clearly that the President disagrees with.”

“On the lunch with the Vice President,” Henry began, moving on to the narrative that allowing photographers into the lunch was a way to burnish Biden, “you let the photographers in. That is a great positive step, but you did not let any reporters in. We see this more and more that, you seem to think giving more access is letting photographers in, which we support, but we can’t have anybody shout a question. If the President wants to defend the vice president…”

“And you’re leaving out that word for word, minute for minute, this President has answered more questions from the free and independent press, or at least as many, as his predecessors,” Carney shot back.

“Why not today?” Henry asked.

“I don’t know of any president in history who’s taken questions every day,” Carney said.

“He hasn’t take an question since, what, December 20th? The last news conference,” Henry said.

well, we were away for quite some time,” Carney replied. They’re both right, it was December 20, but 3 working days have elapsed since the President’s return from Hawaii.

“When did we go to South Africa?” Carney mused, which was also in December, and added “I was physically in the presence of both presidents when is President Obama and President Karzai exchanged greetings.”

“They had a substantive discussion?” Henry asked.

“They have had discussions in the past,” Carney said, adding “There’s not a lot of mystery about our views on this document that was negotiated in good faith, and the need to sign it on the part of the Afghan government. So we have a robust and constant communication with the Afghan government, both from Washington and from our embassy in Kabul, as well as through our military command.”

“When was the last time the President spoke to the lead US commander in Afghanistan?” Henry ask.

“We’re on a war footing right now, and you don’t know the last time he spoke to the commanding general?!?” Henry exclaimed.

A momentarily nonplussed Carney icily replied “I’ll have to take the question, Ed. Thank you.”