Ed Henry Frets That if Obama Had Been Attacked, Only Pete Souza Would’ve Gotten a Good Picture 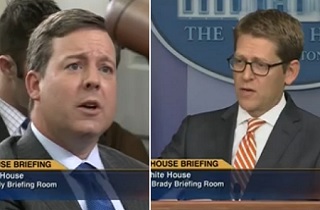 At Thursday’s White House briefing, Fox News’ Ed Henry broached the topic that would eventually result in a full revolt over photographer access to the President, but in making the case for more access, presented a rather ghoulish hypothetical with a dubious priority at its center. Henry referenced an earlier question about the possibility that bogus sign language interpreter Thamsanqa Jantjie could have become violent with President Obama, and said that “the official White House photographer was up there, and individual photographers from news organizations that you just hailed were not allowed on that same platform.”

Carney had just finished speaking, with great emotion, about his personal respect for photojournalists, particularly in combat situations. “I spent some time overseas and occasionally was in dangerous places,” Carney said, “and what I always thought was amazing was that every reporter in those situation puts himself or herself at risk. But when you’re a TV or print reporter, and there are bombs or bullets, you duck. When you’re a photographer or cameraman, you stand up And I have huge admiration for that service to the free flow of information, and the unbelievable bravery that cameramen and photographers display, especially overseas, in hard areas and in dangerous areas, like Afghanistan, like Syria and elsewhere.”

Henry then said “At the Mandela memorial service, the official White House photographer was up on the platform with the current president and two former presidents. You were asked earlier about the possibility there could have been a terrible incident with this interpreter, potential security issue. The official White House photographer was up there, and individual photographers from news organizations that you just hailed were not allowed on that same platform. That was just a couple days ago.”

“A couple things, Ed,” Carney said, over crosstalk from Henry. “There were photographers there, and I think if you ask photographers on the trip, our staff went to great lengths to get as much access for all of our traveling press, and essentially got more access for our traveling press than we were told we would get. I think if you asked the people who traveled, they would confirm that. That includes photographers and print reporters and TV reporters. So that’s something when we go overseas, we work with all the time.”

“Now, the disposition of the photographers when it comes to where the President is standing or sitting,” he continued, “is obviously something that is worked out, depending on the the host government and what we can do in working with the photographers. But this is something I promise you, Ed, we take these concerns seriously and we’re going to work hard on addressing them in ways that we hope will be responsive.”