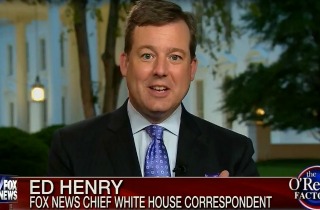 Fox News White House Correspondent Ed Henry said that President Barack Obama and his administration believe that removing VA Sec. Eric Shinseki from his role over the VA scandal would be a repudiation of his opposition to the Iraq War and “giving in to [Donald] Rumsfeld and the Bush team.” Henry and Fox host Bill O’Reilly then proceeded to argue over whether Shinseki’s opposition to the Bush administration’s Iraq War strategy has been vindicated.

“Let me tell you why the president has stood behind Shinseki,” Henry began. He said that Obama believes Shinseki, as a wounded veteran and a four-star general, is a “patriot.” However, he added that the “key political” aspect of Obama’s support for Shinseki is his opposition to the Bush White House’s prosecution of the Iraq War.

RELATED: Matthews Rips Obama on VA Scandal: ‘We Have a Waiting Time from the President Now’

“If Barack Obama now as president has to admit that Shinseki’s judgment is off — he was right about the Iraq War, perhaps, but he is wrong here — then they are giving in to Rumsfeld and the Bush team,” Henry submitted. “They don’t want to do that here at the White House.”

Henry also suggested that Shinseki acts as a firewall for criticism over the VA issue and, if he were removed, all the “accountability” would be on the president.

O’Reilly said that Shinseki was wrong when he wanted a massive surge in Iraq, even though a smaller version of that strategy was eventually adopted. “If Shinseki was there, we would have lost,” O’Reilly insisted.