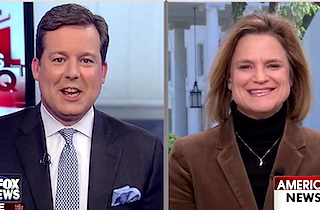 On Wednesday, he interviewed Palmieri for Fox, and revisited the issue: “You’re kind of hurting my feelings here,” Henry said. “You think as a guy I can’t understand pay equity?”

“I noticed that the news organizations that had men, all with the exception of Julie Pace with Associated Press, asking these questions of Jay,” Palmieri said. “I think a lot of the questions were questioning whether it was actually a problem. I think that’s something that’s interesting, that both men and women correspondents would want to probe at more. That’s why it’s good we’re having this discussion.”

“This was a commentary not on you all, I think you do good work,” Palmieri said. “But this is who [the news organizations] choose to send.”

“In terms of Jay [Carney],” she continued, “It’s a fair criticism, and I saw a lot of it, that our press secretary is a man. He’s a man who thinks this is a big problem—in fact his wife wrote a book about pay equity—and supports these rules. And here I am: I’m the communications director, I’m a woman, and I’m out here today.”

Henry got in the last word when he thanked Palmieri for her explanation on behalf of all the male White House correspondents.