Ed Rendell On Pressure To Stop Romney From Campaigning With Trump: ‘I Don’t Think Voters Care’ 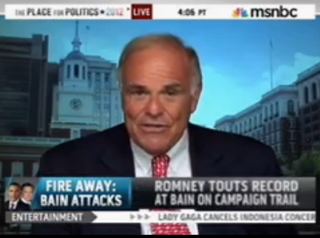 Former Pennsylvania Governor Ed Rendell appeared on MSNBC this morning to weigh in on the Democrats’ campaign against Mitt Romney, after expressing some discomfort with the tone of attacks on the Republican nominee related to his time working in private equity. He told host Thomas Roberts today that he did consider questioning his time at Bain Capital a “proper line of attack,” though, on the Donald Trump front, he didn’t expect many voters to care about his campaigning with the reality TV star.

“I think it’s a proper line of attack, it’s appropriate,” Rendell said of the Bain attacks, as “it’s been the whole reason Romney says he should be president.” He thought it was both appropriate to look at his success record and “the type of value system” his actions represented. Asked whether attacks on Bain “could alienate business-minded independents,” Rendell said he thought it possible. “Calling Mitt Romney a vampire, that’s inappropriate,” he noted, “just like when Rick Perry called it vulture capitalism.”

Roberts also asked about Romney’s relationship with Donald Trump, replaying George Will‘s comments from yesterday morning attacking Trump as a “bloviating ignoramus.” “Bloviating ignoramus is spectacular! Only George Will,” Rendell praised. He did not mind Trump being around, however. “I don’t think voters care about that stuff… candidates appear with a whole different slew of people.” Ultimately, he concluded, “nobody is going to vote for or against Romney because he appears with Donald Trump.”