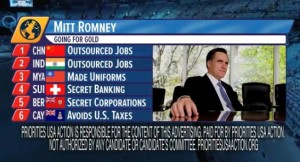 On Wednesday morning’s Morning Joe, panelist and former Pennsylvania Gov. Ed Rendell took a shot at Bill Burton‘s pro-Obama SuperPAC Priorities USA Action over a new ad that uses the Olympics to take aim at Republican candidate Mitt Romney. While Rendell said he thought the ad was “very funny,” when asked “a good funny or bad funny,” he said “an irrelevant funny. I don’t think anybody pays any attention what’s on Priorities USA’s website.”

The ad, entitled “Romney’s Gold,” uses the games’ opening ceremonies to introduce voters to Romney’s various International Man of Mystery credentials, attacking him over the outsourcing of jobs by Bain Capital-owned companies, his Swiss bank account and Bermuda and Cayman Islands business connections, and even the uniforms for the 2002 games over which Romney presided:

Host Joe Scarborough played the clip twice, feigning ignorance of its origin, and opining that it “looks like a late night clip.”

Co-host Mika Brzezinski chimed in that the ad was “terrible,” and co-host Willie Geist was properly offended on Mitt Romney’s behalf. “I understand the outsourcing message,” Geist said, “but was it a negative that he took over the 2002 Salt Lake City games that were a disaster, and sort of rescued them and made them a source of pride for the country? I don’t know that I would put a negative message against that backdrop.”

Given Romney’s newfound contempt for “free stuff,” Geist’s objection went in the wrong direction; perhaps Priorities would have been better served to include Romney’s record-breaking procurement of federal funds to assist in that rescue. While President Obama would probably agree that Romney’s drive and ambition were admirable, he didn’t do it on his own. The taxpayers helped out an awful lot.

The ad also capitalizes on the very recent addition of Romney’s Olympics documents to the former Governor’s transparency (or lack thereof) narrative.

It was perpetual loose cannon Ed Rendell who took the most gratuitous shot at Bill Burton’s SuperPAC, saying that he thought the ad was “very funny,” but when asked “a good funny or bad funny,” he said “an irrelevant funny. I don’t think anybody pays any attention what’s on Priorities USA’s website.”

The ad itself is a matter of taste (I thought it was funny, although not as hard-hitting as some of Priorities’ other spots), but Rendell’s slam against the organization further demonstrates the willingness of Scarborough Democrats like Gov. Rendell and Harold Ford Jr.to broadly undercut the President’s reelection effort in order to ingratiate themselves to the Beltway’s favorite breakfast klatch.

What’s particularly egregious, though, is Rendell’s failure to challenge Scarborough’s false declaration that Priorities has “way too much money,” when in fact, the group raised $11.7 million in the second quarter. That’s less than half of what Karl Rove‘s Crossroads GPS spends on a single ad buy. Don’t like the ad, don’t like the group, but don’t feed the absurd impression that there’s some sort of level playing field here, because that’s simply not true.