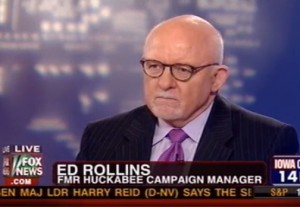 Republican strategist and Fox News contributor Ed Rollins was a guest on Studio B Tuesday, and matter-of-factly told Shepard Smith that he thinks Texas Rep. Ron Paul, “will win Iowa.”

A flabbergasted Smith raised his voice in surprise. “That would turn the establishment on its left ear!” He bellowed. “Spinning!”

Rollins also said that Newt Gingrich, while he shouldn’t be counted out, badly fumbled a chance to win Iowa:

“He has no campaign,” Rollins said. “In his egotistical-driven role here, he thought he didn’t have to have one. He was in Virginia signing books when he should have been in Iowa. He’s not going to win in Iowa. [But] he could have won Iowa.”

Smith then asked about Rick Perry, who Rollins said is making some noise and has a lot of resources. His four true contenders left? Gingrich, Mitt Romney, Perry, and Paul. When Smith asked Rollins about Paul running as a third candidate if he doesn’t get the nomination, Rollins said that, “Paul as a third-party candidate would guarantee Obama getting re-elected.”

The Ron Paul explosion seems to be catching Smith by surprise, even if it was a little feigned for some drama on his show. In 2008, Smith reminded Rollins, “nobody wanted [Paul] in the debates, nobody would let him play, nobody would give him the time of day, nobody would put him on television.”

Watch a clip of the exchange below, courtesy of Fox News: