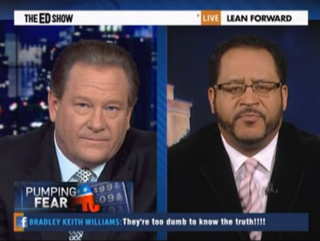 With the Southern primaries coming up tomorrow in Alabama and Mississippi came the news from Public Policy Polling that a plurality of Republican voters there think President Obama is Muslim. This news greatly concerned Ed Schultz tonight, though in a larger national lens, and he asked guest Michael Eric Dyson whether the HBO film Game Change proved that Sarah Palin was the originator of much of the hate.

“Is Sarah Palin at the root of this issue, and the McCain campaign?” Schultz asked, noting that, in watching the film this weekend, he got the sense that “that’s where it started.” “She is one of the major facilitators of this,” Dyson replied, calling her a “woman of manifest unintelligence with no historical perspective” whose rise to fame came on the back of “ceaseless assaults on the President’s morality” that make him appear to many as “the ultimate other.”

He praised Sen. McCain, however, for taking a different route, but nonetheless did see a correlation between his choice of Palin for running mate and the smearing. Asked whether “the bigoted attacks will get worse,” Dyson was optimistic, instead argument that rather than more hate, there would be a rise of “Nixon’s silent majority” of decent people who would “register their most eloquent comments” at the voting booth. While the optimism that not all Americans buy into the “othering” rhetoric that comes from some on the right, this segment lands wide of the mark for myriad reasons. For one, the impulses and ugly undertones to some of the language used on the right is not at all new, nor is it a unique invention of Sarah Palin’s.

Sarah Palin didn’t invent the “Southern Strategy;” with the exception of language that, liberally interpreted, could have served to attracted fringe voters, she wasn’t out there calling President Obama as Muslim or, as Newt Gingrich was actually doing a “Kenyan anti-colonialist.” Unlike Donald Trump, Sarah Palin’s “people in Hawaii” never claimed to find “incredible things.” Palin is worthy of many of the complaints against her and often makes comments or uses language that plays into a narrative of her as a, to use Dyson’s language, manifestly unintelligent woman, but to hoist upon her shoulders the burden of all Republican bigotry lets too many guiltier people get off the hook.