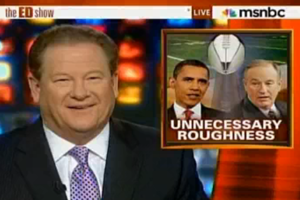 MSNBC host Ed Schultz is certainly no stranger to calling out President Obama for not going on his program, and it seems every time the president interacts with Fox News, the progressive commentator begins the see red. The President’s upcoming chat with Bill O’Reilly on Super Bowl Sunday was no different, though, rather than taking the hard line against the President this time, Schultz merely expressed concern that there was no “upside” to the broadcast, because “you can’t trust ’em.”

The shift from disappointment to concern meant Schultz didn’t touch the issue of loyalty to the base explicitly, though he did let his radio listeners speak for him, and they were not happy, using words like “stupid” and “degrading” to describe the interview, with one dejected listener accusing President Obama of “continually abandoning the left.” For Schultz, though, this was not the problem but, rather, the fact that, with a “partisan broadcaster,” the President was not going to be able to express himself appropriately. During the President’s last interview on Fox News, Schultz argued, “he was treated rudely and could hardly get a word in,” that courtesy of interviewer Bret Baier.

Then Schultz introduced a new element to his show that made the broadcast all the more colorful– someone who wholeheartedly disagreed. NY PIX commentator Lionel came up to bat for the President– and Bill O’Reilly– describing President Obama as Zeus and noting that he must give the interview to the network broadcasting the Super Bowl, as he did last time. He called the President’s move “brilliant,” and of O’Reilly noted that “of the Fox News folks, the guy you’re probably going to get the most fair and balanced… is Bill O’Reilly.” Schultz didn’t seemed convinced, though he pledged his presidential vote to Lionel after the latter promised that, if he were president, “I would’ve gone on The Ed Show, but that’s just me.”

The segment from last night’s Ed Show via MSNBC below: