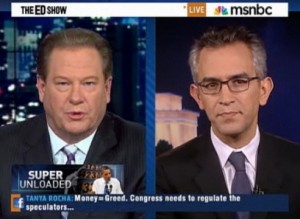 On Thursday, President Obama derided Republican efforts to score political points over rising gasoline prices, casting his GOP rivals as gleeful at the prospect of the political advantage presented by the misfortune of American consumers. On Thursday night’s The Ed Show, host Ed Schultz and MSNBC contributor Richard Wolffe explained, to Republicans like $2-a-gallon promiser Newt Gingrich, exactly how global oil markets work, and how little domestic production can influence them.

Republicans mocking attempts to conserve fuel and making empty promises about gas prices is nothing new, and neither is Barack Obama’s refusal to play along. During the 2008 campaign, then-Senator Obama’s Republican and Democratic rivals pressed a gas tax holiday that would have crippled highway funding, and done next to nothing to the price of gasoline, and Obama refused to play along. He also suggested that proper tire inflation would be a simple way to help conserve, and Sen. John McCain mocked the idea.

On last night’s The Ed Show, host Ed Schultz played some of the President’s Thursday speech, in which he referenced a Politico article that said “Gasoline prices are on the rise, and Republicans are licking their chops,” and told the crowd that there’s no “silver bullet” for rising gas prices.

Schultz then pointed out that domestic oil production has soared under President Obama. “The Republican talking point that the Keystone pipeline and more drilling would lower gas prices is flat out bogus,” Ed said. “The fact is American oil production has increased dramatically under President Obama and his administration. Since president obama took office, the number of oil rigs, the number of oil rigs operating in the United States of America has more than tripled. Domestic, total domestic oil output is up 8% after declining under President Bush.”

He then asked fellow MSNBC host Martin Bashir to weigh in, and Bashir took a gratuitous, cringe-inducing swipe at Newt Gingrich’s adulterous past, saying of his $2-a-gallin gas promise, “The only thing that Newt Gingrich is very skilled at doing is taking his underpants down in the number of forms of adultery this man commits.”

MSNBC analyst Richard Wolffe was more productive. “This is a party that says ‘We understand the private sector. We understand business. This president is clueless,'” Wolffe said.

“We could be producing any amount of gasoline and crude oil in this country,” he continued, “and it would not affect the price of crude oil around the world. It is so much of a bigger market. Saudi Arabia has more direct impact on the price of oil, and it struggles to influence because demand is so high. There is a world market for oil that is irrelevant when it comes to American policy. We can mitigate some things and plan for longer term but we could drill down to Australia, and Allen West would still have a problem filling up his hummer.”

Republicans have been selling the idea that domestic drilling will lead to lower prices at the pump for years now (remember “Drill, Baby, Drill?”), but the facts, as Wolffe lays them out, haven’t changed. Unfortunately, the claim is appealing, and repeated often, often with the aid of the political media.

President Obama also said, in that speech, that the American people aren’t stupid, they’ll see through this. Whether or not you place a lot of confidence in the smartness of the American people, the fact that this same attack didn’t work in 2008 might offer some comfort.