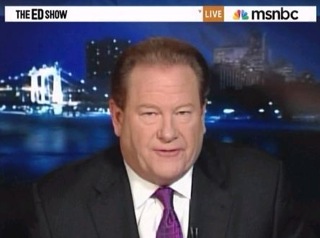 On last night’s Ed Show, host Ed Schultz played an out-of-context clip of Texas Governor Rick Perry discussing a “black cloud” over America, suggesting he was making a potentially racist comment about the President. Tonight, he apologized and played the clip in full, which shows Perry was clearly referencing the national debt, though added that “the full context” of many other clips “show who [Perry] really is,” and it’s not, to Schultz, a pretty picture.

Schultz didn’t make too big of a fuss about the fact that he had taken the quote out of context– although the quote made the rounds on the internet all day today rather loudly– but instead began his segment with a number of other quotes from the governor. Among those quotes: Perry’s claim that Texans would treat Federal Reserve Chairman Ben Bernanke “pretty ugly” because his overprinting money was “borderline treasonous;” Perry claiming America needed a president who “loved America;” and his subsequent “you should ask him” response when asked to clarify whether he was implying that the President was not patriotic.

The Schultz got to the “black cloud” clip, and said, “we did not present the full context of those statements and we should’ve… it was a mistake and we regret the error.” He did not address the fact that he had called the statement “racist” based on the incomplete context, however, or retract his accusations of race-baiting. He then played the clip in full, which seemed to have done nothing to dissuade him of his belief that Perry was “playing for keeps” and would say anything. “The full context of all these other statements show who he really is,” he argued, then adding that he was not alone in believing that: “the master of dirty politics even thinks Perry is over the top,” playing statements by Karl Rove last night that disapproved of Perry’s comments and continuing in an explanation of the relationship between the Bush camp and Perry’s campaign.

While Schultz tried to downplay the apology by cushioning it in attack, detractors will be sure not to forget the incident, particularly considering that the apology, while swift, was likely far too vague and incomplete to absolve him.