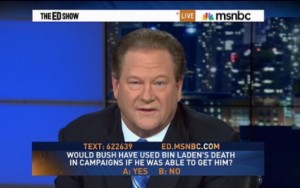 On Wednesday night’s The Ed Show, host Ed Schultz “went to work” on accusations by “Slant-head(?)” Sean Hannity and Rush “The Drugster” Limbaugh that President Obama is using the killing of Osama bin Laden as a campaign tool. His nightly text poll question, “Would Bush have used bin Laden’s death in campaigns if he was able to get him?”, may have been worded to rub it in a little, but the answer is doubly self-evident: Bush exploited his failure to get bin Laden, and his old team is exploiting bin Laden’s death now.

For the uninitiated, The Ed Show is like a Drinking Liberally meeting with cameras, chock full of so much liberal red meat (like the casual nicknamery above) that Schultz has to keep a USDA inspector on the set. One of the highlights of each show, though, is Ed’s text poll, which features questions that actually manage to be the exact opposite of an unanswerable Zen riddle. With typical results in the 98% range (98.2% last night), the polls are not so much an opinion gauge, but a way to measure how many liberals can’t manage to correctly send a text message.

Last night’s question was no exception, but as he sought to make the obvious case, he hit upon the real question that he should have been asking. Amid the deluge of Youtube clips of Republicans exploiting terrorism during the 2004 campaign, Schultz referenced remarks that Dick Cheney made at the time:

According to The Washington Post, Cheney stated, “It’s absolutely essential that eight weeks from today, on November 2nd, we make the right choice.” Cheney continued, “if we make the wrong choice then the danger is that we’ll get hit [by terrorists] again.”

Cheney predicted “that we’ll be hit in a way that will be devastating from the standpoint of the United States, and that we’ll fall back into the pre-9/11 mind-set, if you will, that in fact these terrorist attacks are just criminal acts and that we are not really at war.”

Ed also notes the fact that the Kerry campaign “never really responded to it.”

In fact, the Kerry campaign rarely responded to anything, as if they, too, were afraid to “switch horses midstream,” even if that horse darts toward a waterfall. The question Schultz should be asking is whether Team Obama will let them get away with it again.

The Republicans are launching a two-pronged (and enormous-balled) attack on President Obama, on the one hand siphoning credit for bin Laden’s killing, and on the other, accusing him of “pounding his chest” by…well, by having a schedule?

The response by the Obama administration has been notably, and perhaps necessarily, meager, but the fact is, while President Obama has a tough needle to thread to not be seen as exploiting this for political gain, he damn sure better figure out how to keep it from becoming a political liability. The mainstream media has been all too willing to hold hands and say “We all did this,” but really, the Bush administration deserves credit for this the way Mario Mendoza deserved a batting title. Sure, he swung at a lot of pitches, too, but he didn’t hit very many.

Ed really ought to be asking if the Obama administration will repeat Kerry’s mistake.

Here’s the segment, from Wednesday night’s The Ed Show on MSNBC: