Ed Schultz Blames Fox for Anthem Flub, Declares ‘There Might Not Be a Next Super Bowl’ 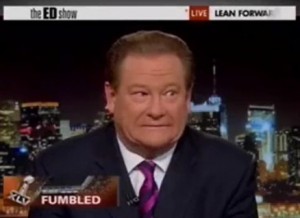 As a recovering Countdown addict, I’ve had some difficulty adjusting to the daily doses of methadone replacement that MSNBC has offered in its place. Sure, they keep the pain at bay, but where’s the rush? Still, unlike Jon Stewart, I’ve found the blustery charms of fire-breather Ed Schultz growing on me.

Yes, he’s louder than Keith Olbermann, and somehow less subtle, but you have to admire the guy’s commitment, and his live-wire unpredictability, as evidenced by Monday night’s episode. Schultz demonstrated primo Fox-bashing chops by laying Christina Aguilera‘s National Anthem butchery at the network’s feet, and made me do a double-take by declaring, “There might not be a next Super Bowl!”

Wait, what? Is there some kind of foretold NFL rapture on the horizon that I missed? I mean, the Jets didn’t win this year’s Super Bowl, so it can’t be the Apocalypse yet, right?

Schultz quickly explained that there might be a strike/lockout next year, but that doesn’t mean there won’t be a next Super Bowl. It just might not happen for two years.

As for Aguilera, Schultz pointed out the way that Fox News Channel wraps itself in the flag, and observed “you would hope that they would get the National Anthem right.”

Both moments made me smile, as did Ed’s frothy outrage over the fans who were kicked out of the game because of unsafe seats, and the suckers who paid $200 to watch the game on TV in the parking lot. Yes, Schultz may lack subtlety, and in the case of the Fox jab, logic, but there’s one thing he gets that many liberals do not: simple sells.

There’s a very good reason that he and Randi Rhodes‘ ratings successes, Rhodes in syndication for Air America and, in Schultz’s case, syndicated radio, topped that of other Air America hosts. Unlike much of the talent at Air America, they were pure radio pros, and they knew how to fit stuff onto a bumper sticker. They adopted the stylistic flourishes that the right has been beating the left’s heads in with for decades, packaging liberal messages in ways that appeal to people who think nuance is some kind of fruity shampoo.

Update: As some have pointed out, Schultz was never actually on Air America Radio, but his program was syndicated alongside Air America programming on XM Satellite Radio. Schultz actually engaged in a pitched blood feud with Air America Radio, and much of their talent, who were upset at having air time awarded to Schultz instead of AAR programming.

During that feud, AAR’s talent questioned Schultz’s liberal bona-fides, and Schultz responded with criticism of Air America’s understanding of the radio business.