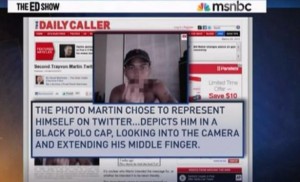 Ever since President Obama offered words of comfort to the family and supporters of slain teenager Trayvon Martin, the conservative media has been working itself into a lather pushing back against broad calls for justice in the case. Earlier, I detailed The Daily Caller‘s thorough contribution to the Trayvon Martin coverage, but on Thursday night’s The Ed Show, host Ed Schultz lashed out at The DC and its founder, Tucker Carlson, accusing the site of “character assassination.”

“The wheels are in motion for a complete character assassination of Trayvon Martin,” Ed began, slamming The Daily Caller for its sustained social media grave-robbing, particularly their emphasis on Trayvon’s original Twitter avatar, which, they said, “depicts him in a black Polo cap, looking into the camera and extending his middle finger.”

“They are also making the case that zimmerman was justified in pulling the trigger because the kid had a tattoo and posted a picture of himself flipping off the camera.”

In an earlier article, The DC remarked, of Trayvon’s newer Twitter avatar, that it “depicts him smiling, gold-toothed, into a camera in front of an electronic dartboard,” which was the only bit of commentary in the piece. Mediate learned that The DC was approached by an undisclosed source who the site says is “known to” them, who provided them with Trayvon’s Twitter feed for publication. They declined to give any other information about the source, other than that it was not anyone connected to George Zimmerman, or law enforcement.

The second Twitter account that The DC raided was briefly taken over by an unknown person, according to an update on their post. Gawker reports that a white supremacist has hacked many of Trayvon’s social media and internet accounts, in an explicit effort to smear the late teenager.

Schultz also  slammed Sean Hannity, and then Daily Caller founder Tucker Carlson, who appeared on Fox News to denounce the people who want justice for Trayvon Martin as “race-baiters,” and to accuse President Obama of making the Trayvon Martin case a “simple parable about white racism.”

“I wish The Daily Caller would try like hell to maybe get the medical records from the first responders who fixed the broken nose and washed up the kid before they took him to the police station,” Schultz said. “Instead, they’re working on Trayvon Martin’s Twitter account.”

Schultz’s guest, Dr. James Peterson, told Ed “It’s also about continuing the legacy of racial profiling. Obviously, young kids flipping off the camera in this day and age of cell phone cameras is one of the most common images a teenager will take. for that to have any bearing on this case or mr. martin’s character is absurd. the tattoos is interesting. people try to profile folk based upon having tattoos. It’s the weakness in our society, how we handle different people we encounter in different situations.”

Trayvon had a tattoo on his wrist that said “Sybrina.” It’s his mother’s name.