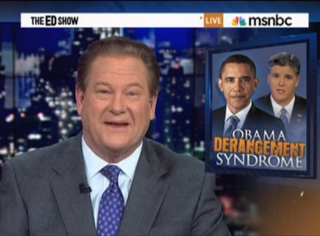 Ed Schultz began something of a feud with Sean Hannity, again, yesterday as the Fox News host had commented that he believed that Osama bin Laden would still be alive and kicking had President Obama “gotten his way.” Naturally, these comments incensed Schultz and led him to a discussion with Hannity over Twitter which resulted in Schultz challenging Hannity to produce any evidence that supported him.

“Sean Hannity thinks there are tapes showing President Obama saying that he didn’t want to get the world’s #1 terrorist, Osama bin Laden?” Schultz explained, playing a clip of Hannity on his program arguing that “if he had it his way” the President would have never found bin Laden. He then elaborated on today’s exchanges between himself and Hannity, in which Hannity explained that he believed that without enhanced interrogation techniques, no one would have found bin Laden. “He’s very wrong, and I’ve got the tape to prove it,” Schultz said on his TV show.

He then played a clip of Deputy National Security Advisor John Brennan flatly denying that waterboarding or enhanced interrogation had anything to do with finding bin Laden, as well as a clip of President Obama promising that finding him was his top priority. What’s more, Schultz continued, “Hannity spent eight years propping up a president who admitted he didn’t care about capturing bin Laden,” he said, suggesting exactly the same thing Hannity had about President Obama about President Bush because of comments that President made that he was “not that concerned” about the individual bin Laden (which did not preclude dismantling the organization responsible for 9/11). nd on that now, clearly hoping for a response, Schultz concluded: “your move, Mr. Intellectual Honesty.”