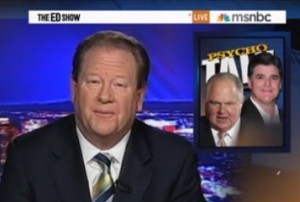 We contacted MSNBC Tuesday before we published criticism of Schultz (and to a greater extent, ABC News’ The Note) for editing a Rick Perry Quote on his Monday night broadcast, but in lieu of a response, Schultz (to his credit) issued an apology during that evening’s broadcast. On Wednesday night, he challenged us to do the same with Limbaugh and Hannity over their claims about the unemployment rate that President Obama inherited: (from MSNBC)

Limbaugh, on his August 8 broadcast, did, indeed, claim that President Obama inherited “an unemployment rate of five point seven-some-odd percent,” and a review of the full five minute segment shows that he didn’t go back and correct himself, or qualify that figure. Here’s the quote, with a little bit extra:

Sean Hannity claimed, on his August 16 show, that President Obama “inherited unemployment at 5.6%,” and a review of the context of Hannity’s remarks similarly demonstrates that there was nothing in the accompanying context that changes the meaning of what he said:

The fact is that, by any measure, these claims are grossly inaccurate. The unemployment rate was at 7.8% in January, 2009, when Barack Obama was inaugurated, and as he has pointed out many times, soared to 9% before a single policy of his was enacted (such as the stimulus package that helped Rick Perry to create all those public sector jobs he’s bragging about). Even if you measure the hand-off from Election Day 2008, they’re each off by a full percentage point.

Limbaugh’s detractors might assume that asking him for a correction is a fool’s errand, but he has actually demonstrated a willingness to do so fairly recently, apologizing to Mediaite in April for a much less significant error. There’s no reason to believe he won’t correct this mistake.

As for Sean Hannity, if Ed Schultz is willing to apologize when he makes a mistake, surely Hannity’s viewers will expect no less from him, and will hold him to the same standard that MSNBC’s executives have set, even for opinion hosts.