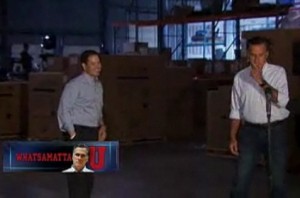 At the tail end of his Vive la France campaign stop in Pennsylvania Monday, presumptive Republican nominee Mitt Romney delivered an unprompted encore, returning to the mic to express support for President Obama‘s (without naming him) proposal to extend low-interest rates for student loans. On Monday night’s The Ed Show, host Ed Schultz asked Romney to put his money where his pander is, calling on the former Massachusetts Governor to get on the horn to Congress and make it happen.

Schultz started out by playing a clip of Romney’s comically transparent pander, so transient that he barely remembered to make it. “There’s one thing I wanted to mention, that I forgot to mention at the beginning,” Romney said. “That was with the number of college graduates that can’t find work, or that can only find work well beneath their skill level, I fully support the effort to extend the low interest rate on student loans. There was some concern that that would expire halfway through the year. I support extending the temporary relief on interest rates.”

Ed then pointed out that “Romney’s pro-education position is not just at odds with Republican party, it’s at odds with Mitt Romney. He supports Paul Ryan’s budget, which would cut Pell grants by $170 billion.”

“It would also double student loan interest rates,” he added. “Mitt, which one is it?”

This issue could be an excellent test case for resolving the “flip-flopper” vs. “severe conservative” conundrum that faces the Obama campaign. Schultz went on to challenge Romney to “call up Republican leadership in the House and the Senate tonight, and tell them to side with President Obama when it comes to student loans because you don’t want to see the rates doubled come July 1st,” adding “You know you’re not going to do it.”

Maybe not, but I’m sure Congressional Republicans have televisions (if not, they can surely watch the clip as they read Mediaite), and when they ignore Romney’s shift on this issue (which most of them surely will), voters will be able to understand that it doesn’t matter what Mitt Romney says, the result will always be whatever Congressional Republicans want it to be. Romney can agree with President Obama on whatever he wants to, from now ’til November, and it won’t make a damn bit of difference. Romney is only as weak as the strongest conservative in Congress.