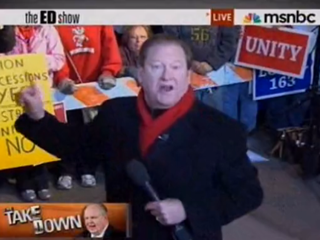 Sometimes, watching Ed Schultz in front of a crowd shouting about politics, one can’t help wonder if he is the reincarnated spirit of some controversial figure of the French Revolution. Schultz has been having a field day with the Wisconsin union protests, reporting live on the scene as a mass of hundreds behind him approve of every word he says. The more vulgar, the louder the crowd– Schultz’s most popular being a demand to Rush Limbaugh to go “wrap your fat ass in the flag.”

That demand came about in response to several claims from Limbaugh against the protesters– calling the union members “freeloaders” and questioning their patriotism. Schultz went through one of his trademark angry tirades against Limbaugh, bringing up his past drug use and ultimately calling for him to “wrap your fat ass in the flag.” Before arriving at that substantive conclusion, however, he thanked the firefighters who worked on the response to the September 11th attacks before accusing Limbaugh of calling them specifically freeloaders (for which Limbaugh received some boos from the crowd). He also played some call-and-response with the crowd, asking if they were freeloaders.

Whether Schultz’s vulgarities have a place in modern political discourse is a weighty question, but if they do, it’s difficult to think of a more appropriate place than this. It would be unfair to call Schultz more offensive than Limbaugh, but he is certainly less self-aware about it– it’s why he is a consistent advocate of “civility,” whatever that may mean. Some may argue that this newfound anger is a product of MSNBC’s Keith Olbermann void, as Lawrence O’Donnell‘s hostility has certainly increased, though in a more contemptuous and less furious way, since his moved to the 8PM hour, but this would be to ignore Schultz trajectory.

There is a time and place for Ed Schultz in his full-blown blustery, uncontrolled glory. It is not, say, in the board rooms of MSNBC. It is not in response to anything said on The Daily Show (though The Daily Show is the Afghanistan of political venues– none that have attacked it have lived to tell the tale). And it’s certainly not whenever he gratuitously uses insults like “fat” and randomly interjects the word “balls” into his argument for shock value. But something about Schultz’s bombast clicks in a loud, messy place at 10 PM full of union members that refuses to work until they receive benefits. It won’t convert anyone to Schultz’s beliefs– and it’ll do little for his personal likability– but it’s at least watchable, and given the dramatic reshuffling at MSNBC, “watchable” is a pretty respectable goal right about now.

Schultz’s rabble-rousing via MSNBC below: