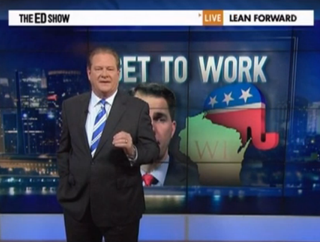 Ed Schultz did not mince words about Wisconsin Governor Scott Walker‘s formidable display in yesterday’s recall election. “You can’t buy enough lipstick to put on this political pig for Democrats,” he explained, but he was not particularly upset with Republicans for their effort (though highlighting the role he thinks Citizens United played), but with union members who still supported Walker, demanding an explanation.

RELATED: Ed Schultz Reacts To Walker Victory: ‘Could Very Well Be Indicted In The Coming Days’

“Last night was about one election and one night of disappointment, but the fight continues on,” he told his audience, admitting that “you can’t sugarcoat it,” even if it is partly “about Citizens United.” “When you lose, you have to look inside– Houston, we got a problem,” he added, explaining that one big sign there was a problem was “27% of union members voted for this guy? Amazing, I don’t get it.” He then turned to those voters and asked for an explanation: “this guy has gone after your wages, he has gone after you pension, he wants to limit your voice in the workplace, and union families in WI, you voted for him? You’ve got to explain to your country and your union why the hell you did that.”

Schultz tried to find the rationale for this, and looked to President Obama’s statement while still Senator that “rural people… cling to their guns and religion.” Citing an Walker ad that attacked Tom Barrett for not supporting gun rights, he called the ad a lie but one nonetheless Democrats had to address. He conclude, “this is a wake-up call for Democrats absolutely everywhere.”