Ed Schultz: Does Mitt Romney Have The ‘Political Courage’ To Denounce Ted Nugent? 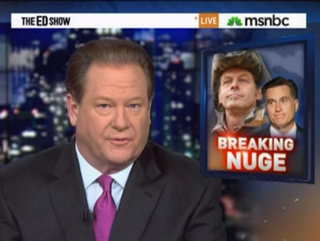 Among the several parallel outrage plotlines happening simultaneously in the 2012 general election race, Ed Schultz chose to open his program today with the story that Ted Nugent said something potentially violent towards President Obama and is vaguely affiliated with Mitt Romney (and by “vaguely,” we mean Tagg Romney once tweeted that he was “cool”). Nugent, who the Secret Service is currently investigating for saying he would end up “dead or in jail,” has not been directly renounced by the Romney campaign, something Schultz took as a sign of cowardice.

“It makes sense for reps and right wingers to denounce a guy like Ted Nugent, who doesn’t appear to be playing with a full deck,” Schultz noted, given the violent rhetoric, his calls to “chop off [Democrats’] heads” among other assorted weird comments. Schultz notes that, instead, some have come to his defense. He highlighted specifically Mike Huckabee, who joked the Secret Service had to be “innoculated from their own Colombian cat scratch fever” and shouldn’t be bothering with Nugent. Schultz saw this as a double-standard: “When Jeremiah Wright said “God damn America,” the right wing said, ‘words matter.'”

Meanwhile, the Romney campaign has an election to win, and is keeping fairly mum. Schultz notes that there is good reason for this: Nugent carries a crowd. “Ted Nugent has put Mitt Romney and the Republicans in a politically untenable position,” he argued– if Romney denounces him, “Nugent takes his head-shaking crowd with him… these are the guys standing in the NRA crowds shaking their heads in accord… this crowd is stuck with Mitt Romney, because Mitt Romney has a shaky record on gun control.” In order to win the election, Schultz argues that Romney “needs to sweep these Nugent comments under the rug.” He concluded with a question to his audience: “Does Mitt Romney have the political courage to publicly denounce Ted Nugent?”