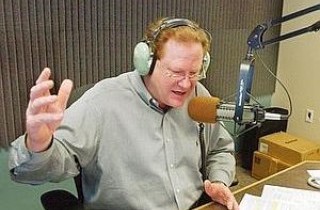 This Sunday, New York Times media correspondent Brian Stelter reported that change may be in the air at MSNBC, with Washington Post columnist Ezra Klein possibly replacing Ed Schultz during the network’s 8 p.m. time slot. The report was (sort of) denied by MSNBC brass, but on his radio show yesterday afternoon, Schultz took to rant against Stelter for printing any such possibilities without contacting him for his own opinion.

“Gosh, there’s a lot going on, isn’t there? Ed Schultz being replaced at 8 p.m. Not so fast!” the firebrand progressive host said before turning attention to the Times reporter:

Here’s the first thing I want to say: Brian Stelter, is that his name? Yeah, S-T-E-L-T-E-R. He’s never talked to me. And if he were to talk to me, I would tell him that I have overperformed in my time period for the third quarter and on my way to do that in the fourth quarter of this year, which puts me in bonus territory. You know, money? I mean, that’s how well we’re doing at 8 o’clock. And so I have never interviewed with the guy, he’s never called me or asked me anything.

While there is no reason to think Schultz would actually know if this was in the works and so his comment on the matter wouldn’t be particularly relevant, he continued to mock the report, citing MSNBC chief Phil Griffin‘s statement that the network is pleased with Schultz’s performance and there are no changes on the horizon:

No changes planned! So I guess I’m on tonight?! I assume I’m on the rest of the week?! I assume that I’m on for as long as I can get you to watch! And this, in a sense, means that I guess I’ve arrived! And it also means that, you know, if somebody is telling Stelter that I’m going to be replaced, we know that his nose as a reporter doesn’t sniff very well because he never called me and I’m probably one of the most accessible guys in the media!

“It’s just media garbage,” he went on to say, “and I just want all of you to know that have listened to this radio show and have watched me on The Ed Show and evolved to where we are, they would have never put me at 10 o’clock and then moved me to 8 o’clock if they didn’t think I could do it.”

He concluded: “My contract is just fine and life is good.” For now.