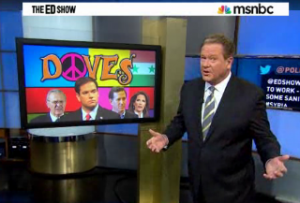 MSNBC’s Ed Schultz is dead-set against military strikes in Syria, but don’t expect him to be reaching across the aisle to embrace anti-Syria Republicans, because as far as he’s concerned, many of these normally-hawkish conservatives are only opposing military strikes because they just can’t stand agreeing with President Obama on something. Schultz went so far as to claim Republican opposition to Syria strikes is rooted in their “hatred of our first black president.

On his show Thursday, Schultz asked, “What does it take to get a Republican to be against a war or confrontation?” The answer, he said, is to have President Obama be the one leading it. Schultz repeatedly clarified that he also opposes intervention, but Republicans are only doing so because they “cannot stomach the fact that they might be agreeing with” the president.

He argued the level of “spite” is so high that even people like Donald Rumsfeld who were gung-ho on Iraq are suddenly raising all sorts of questions about military intervention just to make Obama into “a big failure,” and got to what he believed was their true reason for opposing missile strikes and why it differs from his far more noble reasons.

“I really believe that everything that we have said on this show are reasonable, patriotic reasons to be against another war, another strike, another act of war––and that’s what it is––but hatred of our first black president is not.”