Michael Eric Dyson: GOP Refuse Raising Debt Ceiling ‘Because The Economy Is In The Hands Of The Black’ 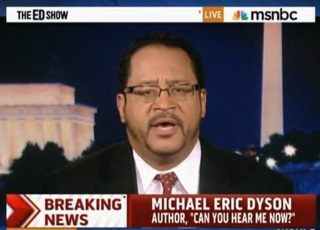 There are plenty of theories as to why the current Congressional debt talks appear on the outside to be something of a complete failure. Most Americans have probably concluded that Congress is incompetent, or that partisanship has given way to too much emotional and ideological strife. But for Georgetown Professor Michael Eric Dyson, the answer is obvious: “Congress will not vote to put the economy in the black is [sic] because the country is in the hands of the black.”

On tonight’s Ed Show, Ed Schultz, Prof. Dyson, and HuffPo‘s Sam Stein tried to make sense of the current debt debate, trying to find why Republicans were being so adamant about not raising the debt ceiling, even when, under Reagan, Clinton, and many others, they had yielded on this point. Asked by Schultz whether the “gist of it is not to give President Obama a leg up on any of this,” Dyson responded that the only reason he could find for Republicans to deny President Obama the easy rise in the debt ceiling was that “the country is in the hands of the black.” Immediately catching himself, Dyson added the caveat that his comment sounded “extraordinarily harsh and divisive,” but that “there seems to be no logical or reasonable answer.” He went on to conclude that Republicans “refuse to see the legitimacy and the authority of the President.

This isn’t the first (and likely not the last) time that self-appointed political referees have flashed the race card at players on the field, the most recent instance being Rep. Sheila Jackson Lee telling her colleagues that the fact the President is black was making the entire debate more troublesome (her comments– as well as her shirt– garnered her some coveted airtime on the Daily Show that night). But this is probably the most high-profile, blatant instance of race employed to explain the confusion of the budget talk.