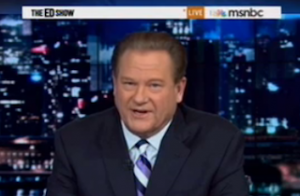 MSNBC’s Ed Schultz used the final moments of his final weekday primetime show to address his move to weekend afternoons and welcome his replacement Chris Hayes with open arms.

Schultz’s farewell message was mostly positive, though he did work in an ornery dig at POLITICO writer Dylan Byers, who wrote that Schultz’s new time slot was “a relative no-man’s land for cable news programming.”

“Really?” Schultz asked. “Well, I guess I wouldn’t want it any other way because we’re going to build those hours to the best hours in cable.” He vowed to stay loyal to the subjects he’s always covered on The Ed Show: “The people on the road, the stories, the butcher, the baker, the candlestick maker, the middle class Americans who are fighting for a fair share.”

After thanking his wife Wendy, who recently struggled through a difficult bout with ovarian cancer, Schultz reminded viewers that on Sunday afternoons “the biggest brand in liberal talk” will be getting “the first whack” at the Sunday shows.

Finally, Schultz urged his viewers to stay loyal to the 8pm nightly show on MSNBC, which Chris Hayes will take over starting April 1st.

“Stay here at 8 o’clock Monday through Friday because Chris Hayes is going to do a fantastic job,” Schultz said. “He’s a great, brilliant young talent who’s going to have a lot of years at 8 o’clock.”

In his his toss to The Rachel Maddow Show, Maddow said she “was so looking forward” to Schultz’s weekend show. “Onward and upward, Ed,” Maddow added before saying goodbye and beginning her show.