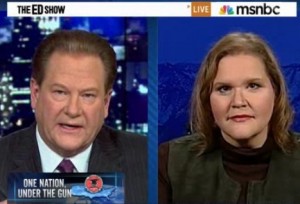 The fruits of NRA executive vice president Wayne LaPierre’s crusade to arm our nation’s teachers was on luminous, loony display Wednesday night, as Ed Show host Ed Schultz interviewed a Utah special education teacher who plans to carry a concealed weapon to class, and doesn’t think her students’ parents should know anything about it. Carolyn Cain, who teaches kindergarten through 6th grade at a Utah County elementary school, also believes that there should not be a ban on assault weapons, because “an assault weapons ban doesn’t mean the criminals couldn’t get them.”

If recent polling is any indication, Americans don’t need another reason to hate the idea of armed teachers in our nation’s classrooms, but in case there was any doubt, feast your eyes on the crystal-clear thinking of Carolyn Cain.

Ed asked Ms. Cain why she wanted to carry a gun in school, and she responded that “It’s not so much that I want to carry a gun. I want to have options, for that situation. I think the world is changing. It’s not safe.”

That’s an understandable reaction to the tragedy at Sandy Hook Elementary School, as was her instinct to identify with those teachers. Cain said she hadn’t known, until recently, that Utah allowed teachers to carry concealed weapons to school (actually, anyone with a concealed carry permit can bring a loaded gun into a school), and when she found that out, thought “This is something that I want to learn about, and I want to be able to do if I have to.”

Wanting to keep a gun in a classroom full of kindergartners at all times in case a mass shooter shows up isn’t necessarily the most rational thing in the world, but it at least makes some logical sense. Not wanting to do anything to prevent a mass shooter from acquiring the portable arsenal those teachers and students faced in Newtown, however, doesn’t really mesh with that thought.

What’s really disturbing, though, is that when Ed asked her if she was “worried that it might be accessible to some rambunctious kids?”, Cain replied, “Well, those are still questions.”

She added that “I want to feel comfortable that I’m not putting my students at more danger by carrying a gun myself, but the more I’m learning, I think there are some safe options.”

While that’s an honest answer, it isn’t one that inspires a lot of confidence. Cain went on to say that the parents of her students “know that I love their children, and I wouldn’t put them at risk in any way,” but how many of them would still feel that way if, when dropping them off, Cain told them “Hey, don’t worry, I’m not sure I can keep the gun I’m carrying away from your kids, but I think there are some safe option.”

Lucky for her, any parents who don’t watch The Ed Show will never have to worry about it. “What if you had a parent who objected to it?” Ed asked.

“Well, in the state of Utah, a parent doesn’t have to know about it,” Ms. Cain replied. “Teachers can carry a firearm and nobody ever — they’ve been doing it for 12 years. I’ve found out more and more about teachers that do.”

Asked if she personally believed that parents have a right to know, Cain started off on a tangent about teachers, then settled on “Not necessarily.”

The question is “Why don’t parents have a right to know there’s a gun in their kids’ classroom?” Go!

“Well, because I think that firearms — what we do know is that the bad guys come in to schools. What we don’t know — I mean, we’re making lots of guesses about what could happen if. And those things haven’t happened. Like I said, we’ve been able to carry them for 12 years here in Utah, and I haven’t — I have not heard them, and they would be on the news if those things happened. so I think causing more — it’s the same reason I would prefer not to have big armed militia next to the door for the kids to see.”

Cain seemed pretty confident that the parents in her community would have no problem with all of this, but I don’t know too many parents who are comfortable with teachers who think parents don’t need to know things. Maybe things are different in Utah.

As scary as a classroom full of kindergartners spending years searching for Carolyn Cain’s loaded gun is, the Utah state laws that allow it, and allow parents to be completely unaware of this, are even scarier. No civilian has ever managed to stop a mass shooting, and even trained police officers can shoot the wrong person. Arming teachers is insane, but doing so in secret is downright immoral. We’ll see what the parents in Utah have to say about it when they see this.