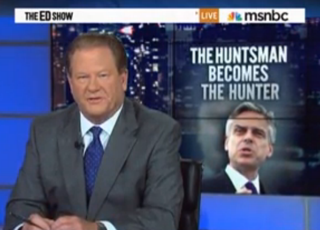 Jon Huntsman has taken the reins on the news cycle this Monday by going on the offense to the media as the “moderate” in the party, attacking those seeking the Republican nomination for being “irresponsible” and, in some cases, “insane.” On tonight’s program, Ed Schultz praised him for this position, but speculated as to his future should he not win the nomination: if Rick Perry “waltzes” to the nomination, will someone like Huntsman be able to endorse him publicly with a straight face?

Schultz noted that, before this weekend, Huntsman was like “that Sports Illustrated “faces in the crowd”– nobody really knows who he is,” but since taking on “the craziness in the Republican field,” he is gaining traction. While making a point to disagree with Huntsman that America is a “center-right” country, Schultz still gave him credit because “these criticism aren’t coming from a liberal Democrat– they’re coming from a man who describes himself as a center-right candidate.”

Schultz discussed the matter with author Jim Moore, who argued that Huntsman was “doing the Republican Party a very big favor” by “trying to see if there are any sane and sober people out there.” He also thought the tactic was smart because “he doesn’t have a chance trying to out-Perry Rick Perry… he’s not going to be the anti-science guy.”

On that note, Schultz replied with a question: “How does a Jon Huntsman come out, who is respected in the Republican Party, and say ‘yeah, Rick Perry is our guy!’?” The answer, according to Moore, is that he doesn’t. “I really don’t see Jon Huntsman holding his nose and saying ‘yee-haw, Rick Perry all the way to the White House!'” which he predicted would be a problem for the party in the future, as they would be inevitably torn apart in a general election with Perry– a sworn enemy of the Bush family, Karl Rove, and a number of other big-name Republican players. This, of course, in addition to alienating on political grounds moderates like Huntsman.