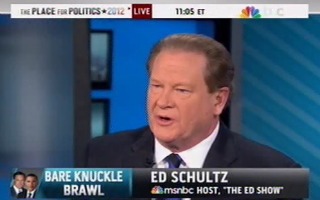 MSNBC host Ed Schultz gave his opinions on Tuesday night’s presidential debate between President Barack Obama and GOP nominee Mitt Romney on Wednesday morning where he slammed Romney’s handling of a question regarding the White House’s handling of the 9/11/12 attack on the American consulate in Benghazi. Schultz said that Romney is “inept” in handling issues relating to foreign affairs and will be easily defeated in the final debate which focuses exclusively on foreign policy.

“Mitt Romney is inept on foreign policy,” said Schultz. “The next debate is going to be a real hard lift for him.”

“Look how the conversation of the country has changed,” said Schultz. “The issue of national security has been almost taken off the table. We’re now talking about an isolated attack in Benghazi. It’s a terrorist attack. The president said that in the Rose Garden the day after it happened and they’re not even accepting that answer. They’re trying to wordsmith it out as if the president really doesn’t have his act together and his foreign policy is unraveling. The American people aren’t going to buy that.”