Ed Schultz Occupies Wall Street, But His Producer Claims They Have No ‘Specific Agenda’? 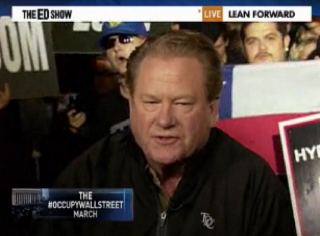 Ed Schultz is distancing himself from the Occupy Wall Street movement. Well, not literally; he hosted a show located within their proximity. And not ideologically; he has said he fully agrees with the anti-corporatist protests, even when not directly discussing the protests. But in discussing the coverage with Politico, Schultz’s producer claimed the show had no intention of “promoting an agenda”– and in so doing highlighted the difference between the left and Occupy Wall Street today and the right’s relationship to the Tea Party movement in 2009.

Schultz broadcast his program from the protests on Wall Street Thursday night, and has regularly covered the event for most of the week. On that instance, his interview in front of the protesters (labeled on MSNBC.com as “Ed Stands With The Wall Street Protesters”) focused on what many of the ideas of the protesters were, how “Big Labor” was now involved (a movement Schultz has made no bones about being a staunch adherent to), and a debate on whether Occupy Wall Street was good or bad for President Obama. That segment below:

Schultz’s hosting of the program from the scene of the protests and vocal approval of them is not without precedent– he similarly visited Wisconsin to support the union protests there and, long before that, conservative hosts were doing the same. Take, for instance, Sean Hannity, who hosted his program from the scene of not one, but multiple Tea Party protests at the same time:

Hannity has never distanced himself from the Tea Party nor did he, while the protests were still nascent, claim he was attending them as an objective observer. As a commentator and not reporter, Hannity– like Schultz– reserves the privilege of supporting ideological causes. Except, unlike Hannity, Schultz’s team opted not to reserve the privilege. Anyone watching Schultz’s segment, particularly with the precedent on the right established in recent years, must have been surprised to read that The Ed Show‘s executive producer declared the objective of that trip to Wall Street had nothing to do with encouraging or showing the protesters solidarity:

“We were there covering the event to find out what the story was all about, not to promote a specific agenda that any of the protesters had last night,” said Rich Stockwell, the executive producer of “The Ed Show.”

In fact, they had not even planned to anchor the show from the protests on Wednesday night, but after going down to shoot some interviews that afternoon and seeing the size of the crowds — ranging from 10,000 to 30,000 — and hearing complaints that echoed many that Schultz makes nightly on his show, they made a last-minute change.

Stockwell said that the show had been monitoring the protests for weeks but did not cover them until Monday, following the arrest of 700 protesters on the Brooklyn Bridge on Saturday.

Contrast the statement that there was no intention of promoting a specific agenda with the content of the segment itself, in which Schultz appears passionate about the message that corporations were doing a disservice to the nation (in fairness, it is a sentiment he has routinely expressed without relation to the protests). Either Schultz was not told that he was not supposed to be “promot[ing] a specific agenda,” or Stockwell wasn’t told Schultz did just that, or both are operating on a wildly differing definition of what promoting an agenda means to begin with.

RELATED: Jon Stewart: How Are The Occupy Wall Street Protesters Not Like The Tea Party?

That is not to say that there is anything wrong with Schultz doing just that. As we saw above, Hannity pleads guilty as charged to doing so all the time, and, as noted above, he is entitled to. Schultz is a commentator, not a reporter. No one watches The Ed Show because they want to know what is going on in the world; they watch because they value Schultz’s opinions on news they probably already know about. When Schultz does aim to break news, he often chooses causes he believes have been ignored because of a right-wing media bias, and often explicitly says so. Given how many of the points the Wall Street protesters make align with points Schultz has been making on television and the radio for years, it is no surprise that he should keep compelled to stand with them, and it is not disingenuous for him to do so. But to claim that airing the program at the site of the protests was an attempt at objective reporting and not intended to “promote a specific agenda” is an insult to the intelligence of viewers, and of protesters who heard Schultz declare his solidarity with them only to read the next morning in Politico that he apparently had no interest in any of their agendas.