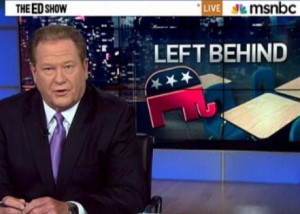 Last night Ed Schultz was fired up responding to Rush Limbaugh‘s “shameful” Casey Anthony statement that the death of a child doesn’t usually upset liberals. Schultz declared that right-wing talkers “will use any story possible to make the Democrats look evil,” and then proceeded to use this story about Rush’s one comment to make the entire Republican party look evil.

Schultz considered Rush to be the “the worst of the worst,” concluding “garbage spews from the drugster like that every day and low information voters love the entertainment of it.” With his anger flowing, Schultz then revved up his anti-Republican rhetoric:

“Republicans also claim that they are the party of life and they prove time and again that they don’t really give a damn about you after your born. . . . Republicans you see have been on this non-stop thirty year mission to murder the American dream by protecting only the rich.”

Schultz then shifted gears, pleading with Democrats not to back down during the budget negotiations and to prevent Republicans from continuing to “hoodwink” America into thinking that raising taxes on millionaires would hurt the economy.

Regardless of one’s politics, it’s hard not to find amusement from Schultz’s nightly brand of loud and in-your-face commentary. In fact, it reminds me of a certain radio host who also can be enjoyably over-the-top at times. Ultimately, I think it’s good for both Republicans and Democrats to have commentators like Rush and Ed who keep the rhetorical flame burning high, as that helps to keep Americans not only interested, but also passionately engaged in important political issues.

Yet with compromise nearly impossible in Washington these days, could that be a result of hyper-partisan shows like these contributing to a society with citizens increasingly intolerant of views dissimilar from their own and if so, is the entertainment from these shows worth the trade-off? Actually, I personally think it is. There’s already enough other people in America who every day have to be serious (and boring), so keep up the fireworks, Rush and Ed, your country needs you!