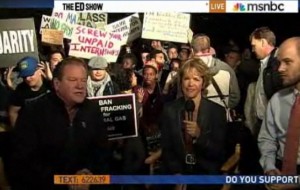 Defying dismissive mainstream media narratives, the Occupy Wall Street demonstration continues to grow, and gather momentum. While coverage of the movement has varied in quality, MSNBC’s Ed Schultz has been broadcasting live from among the protesters. In an interview with Mediaite, Ed acknowledged the “good, the bad and the ugly” of the protest, but pointed out that, “Unlike the tea party, I didn’t see any racist signs, I didn’t see any firearms,” but rather, people “concerned about the quality of life and fairness in America.”

I interviewed Schultz on a variety of topics this morning, and when the subject of his live broadcast from the Occupy Wall Street protests came up, Ed, who has spent a lot of time on the ground at demonstrations this year, was particularly voluble. Here is that portion of our interview:

Tommy Christopher: I was watching some of the footage from your show from Occupy Wall Street last night, what do you think of the way that this is being treated? I’ve seen the way you’ve covered it, and I saw the way Fox News covered it and the way the other networks are covering it. What do you think is the big difference?

Ed Schultz: You can’t socially engineer a live shot. You can’t socially engineer a protest. I went down there for four hours yesterday before I did my show, because I wanted to make sure I had a pulse of what was going on, and I call this America’s Middle Class March. They call themselves the 99%, that’s a very good description. There’s all walks of life down there, the good, the bad and the ugly. And I think that these Americans have very legitimate concerns that they believe their country is not addressing.

I think the angst, and the anger is now coming to a boiling point and it’s growing. It’s very genuine. Unlike the tea party, I didn’t see any racist signs, I didn’t see any firearms. I saw a bunch of people who were concerned about the quality of life and fairness in America. Eventually, the politicians are going to have to address this protest.

TC: Do you feel that the protestors are getting a fair shake from the rest of the media or do you think they’re being dismissed.

Ed: I haven’t watched all the other coverage, you can go around America and find protests just about anywhere. I think that’s one of the reasons why this didn’t get coverage right away. What is it? What does it mean? What’s its impact going to be?

It’s obviously taken on a life of its own. There are still some $64 questions surrounding this protest,meaning how long will it last? What does it mean? And will it really make a difference? And so the curiosity of it all is very interesting. I stand with the protestors. I believe they’re making very valid points that our government’s not answering.

TC: What do you think of the fact that they’re targeting Wall Street though and not the government?

Ed: I think Wall Street has bought the government. I think the Wall Street influence in our legislative process runs really deep.

TC: So they’re going over the government’s head in a way?

Ed: There are middle classers, there’s hard workers down there, there’s unemployed people, there’s school teachers, there’s public workers, there are anarchists, when you say 99%, you’ve got a pretty big tent.

I think they have legitimate concerns that need to be addressed. I think this isn’t a joke, this is a real story.

TC: You’ve talked to a lot of the protestors. Whats your sense of how they’re feeling toward the government, toward the White House, toward the Congress, is there a direction of their anger – in anyway unified? Or evenly dispersed?

Ed: I think now that the unions are involved, they’re going to give them some focus on how to force this change. I think this is America, we seen protests before that have fizzled out, (and) we’ve seen protests force change.

TC: On the subject of unions, you’ve been the man on the street for these protests in Wisconsin and all this anti-union stuff. Do you see the trend against unionization reversing itself? It seems like a desperate situation, unions are really in a fight for their lives.

Ed: I think workers are under attack in this country, there is no shared sacrifice. We have a political party in this country, the Republicans, who think that there should be more tax cuts for the wealthy, more tax cuts for the corporations yet they’re willing to take away benefits, wages and security for workers. The battle lines couldn’t be any more clear, you’re either for the workers, or you’re not and these folks protesting down there are sick of the corporate greed and sick of the imbalance and they think that fairness has left the building.

Here’s a clip from Ed’s live broadcast, from MSNBC: