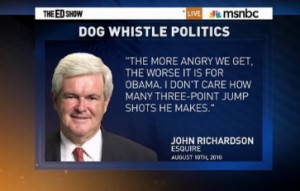 Salon‘s Joan Walsh got a blistering reaction from conservatives when she wrote a column denouncing GOP Wishful™ Newt Gingrich (R²) over a raft of racial dog whistles, including his nicknaming of President Obama as the “Food Stamp President.”

Walsh appeared on The Ed Show with Prof. Michael Eric Dyson Monday night, where they discussed Gingrich’s oeuvre, and punched holes in the right’s predictable argument that is it Walsh who is, in fact, the racist for noticing.

Conservative media watchdog Newsbusters, somewhat to their credit, doesn’t rely on this idiotic premise, but in the first paragraph of their writeup on Walsh, identify the flaw in the right’s typical defense of this sort of thing: (emphasis mine)

Yes, Newt Gingrich just emerged from the cabbage patch onto the set of Meet the Press, and was cruelly ambushed by David Gregory over this completely innocent remark, a remark that ignores the fact that President Obama cut food stamps (Rush Limbaugh said so!). He’s never made any other questionable statements, and no Republican  has ever tried to demonize black people as abusers of public assistance.

Except he has, and they have, which makes this statement by Big Journalism’s Dana Loesch either ignorant, or dishonest:

In a conversation about race, when one immediately thinks of black Americans when one hears food stamps, is not that a clear indicator of prejudice and stereotyping?

If you said yes, then check out the latest column from Salon’s Joan Walsh. Apparently, Joan Walsh believes food stamps are something inherent to black Americans only.

Got that? The guy who’s running against the first black President evokes a stereotype that his party’s Dalai Lama perfected, but it is Joan Walsh who  is the racist for noticing!

You don’t even have to go back to Reagan to hear the beat of this drum. Modern, supposedly post-Southern Strategy conservatives never shut up about how Democrats are keeping black voters “on the plantation” through social programs like food stamps. Newsbusters‘ Noel Sheppard helpfully points out that most food stamps recipients are white, but the message to Gingrich’s audience is that the white ones are just honest, hard-working people who are going through a rough spell, and the black ones are hitching their wagons to Obama for a handout.

Both Loesch and Sheppard ignore the fact that Walsh also placed Gingrich’s comments in context with other recent examples of this tactic. In fact, in her Ed Show appearance, Walsh even allows that if the food stamp remark was an isolated incident, it might be possible to overlook it.

Of course, it isn’t, not for Gingrich, and not for his party. In the segment leading up to the panel discussion, Schultz runs through several examples. While thorough, Ed does badly miss the point of pre-Civil Rights voter literacy tests, which were not at all about exploiting black disadvantages in education. It didn’t matter what you knew, or didn’t know. The only correct answer to those test questions was “You ain’t gonna vote today, boy!”

Dyson and Walsh explain why they believe Gingrich is engaging in barely-coded race-baiting. Dyson makes the point that Gingrich’s “water’s edge” language affords him a double-dip at racial resentment, allowing him to not only attach President Obama to black freeloaders, but to stir resentment of anyone who calls him out on it by playing the victim. He and Walsh also emphasize that this is a pattern with Gingrich, and that Gingrich is supposedly a student of history, key points in divining his intent.

It is unfortunate that many conservatives are so heavily invested in reflexively defending people like Gingrich, instead of joining the few who have the courage to call it out, and maybe eradicate it. As Dyson points out, the whole point of these dog whistles is “plausible deniability.” If Gingrich were out there saying “Obama is the lazy n***er President,” it wouldn’t be a dog whistle, it’d just be a whistle.

Are there conservatives who are wrongly accused of dog whistling? Certainly. Although he hasn’t earned the benefit of the doubt, I tend to believe George Allen‘s explanation of a recent remark that offended a reporter. If conservatives like Loesch and Sheppard would ever acknowledge that it is possible to say something racist without using the n-word and burning a cross (or, y’know, pointing out when someone is doing that), their defenses of people like Gingrich might actually have some resonance. It’s too bad, because if Gingrich, Mike Huckabee, and Donald Trump are any indication, the 2012 campaign is going to keep them very busy.

One final note for Ed Schultz: I don’t think adding “ster” to someone’s name carries the wallop you think it does. Edster. See? It barely registers.

Here’s the segment, from The Ed Show on MSNBC: