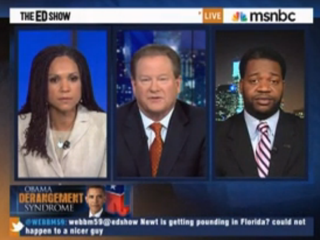 Ed Schultz opened his program tonight with a segment of Republicans behaving badly– from RNC Chair Reince Priebus to Arizona governor Jan Brewer to Rep. Allen West. Schultz and his guests, Melissa Harris-Perry and James Peterson, made the point that Priebus’s comparison of the President to the Captain of the sunken Costa Concordia, Brewer’s exchange with him in Arizona, and West’s demand that he leave America were all indicative of the same illness in Republican politics.

“How low will they go?” Schultz asked regarding the Republicans. The comments did not appear to bother Harris-Perry much in political terms, but she did not that “what it does in terms of the divisiveness of the American people” was concerning, though it would ultimately, she predicted, help the President.” Peterson suggested that “yes, we want to raise the level of American discourse,” but that “the American people are getting used to this,” and that the chances of it getting better soon were slim.

They then turned to Rep. Allen West’s bizarre comments effectively throwing President Obama and several Democrats out of America. “It’s the oldest, nastiest way of throwing some people out of the American story,” Harris-Perry commented, adding that she believed it to be “much more dangerous than any mean words we call the President” because Rep. West was trying to redefine what was acceptably “American.” Peterson agreed, though seemed confused about why the story was an issue at all. “Who is Allen West? Who is this guy?” he asked incredulously, adding that “he seems to me to be really off the charts here,” and that “when we think about the ways in which the political discourse has been contaminated by this kind of language, we need to be concerned.”

They finally discussed the rhetoric of the modern Republican Party, and Schultz noted that the vitriol was somewhat new, since he hadn’t heard it from Democrats or from Bob Dole or President George W. Bush (yes, Schultz defended President Bush, albeit in a roundabout way).

The point is made that much of the rhetoric in politics today is divisive and Americans have a civic duty to be concerned about that problem. However, the segment suffers from being too expansive for its own good. The thesis of the collective argument Schultz and his guests are making is that something about President Obama sets off Republicans in a way they had never been set off before– that something about his identity throws them off. The problem is that, in gathering his data, Schultz lumped together three vastly different situations. Priebus comparing the President to the captain of the Costa Concordia is nothing like Jan Brewer sticking her finger in the President’s face is nothing like Rep. Allen West delivering an unhinged rant, first and foremost because these three political characters are nothing alike.

Priebus, the Tim Pawlenty to Michael Steele‘s Jesse Ventura, only showed his face, one assumes, to remind people that he exists and that he runs the party, and in so doing proved he was rusty with media appearances by delivering a weak metaphor. Gov. Brewer has a book to sell and knows how to make headlines. Rep. West has proven time and again to be the first in line to yell unprofessional nonsense about Democrats (or anything, really) wherever a microphone finds him. To assume that, just because these people are all nominally Republicans there is some sort of pattern to what they do is akin to suggesting that there is one particular link between Barry Manilow, Sarah Palin, and Jon Stewart all at some point praising Ron Paul. When you’re President, all roads of disenchantment on the other side of the political aisle lead to you, and looking for a common intention that causes that is often a fool’s errand.