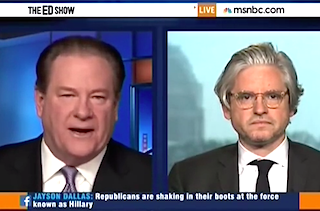 Following Hillary Clinton’s press conference Tuesday afternoon, which the former secretary of state said she opted for the “convenience” of carrying just one phone with one, personal email address during her time in the Obama Administration, MSNBC’s Ed Schultz took the opportunity to poke fun at what he viewed as the luddite nature of her “demographic.”

Parroting the “right-wing” talking points to Media Matters’ David Brock, Schultz wondered aloud if the decision was “poor judgement” on Clinton’s part. “She thought it was much easier, much more convenient that she just use one machine as folks of that demographic call it,” Schultz said, finding the “comedy” in the situation. “There’s a lot of people in her demographic that just don’t want to be overwhelmed by the technology that are gonna take the easiest, simplest route to do something.”

For the record, at 67, Hillary Clinton is precisely six years older than Schultz.

And while Clinton may have insisted on using one phone with one email account when she served in the State Department, she has apparently broadened her horizons in recent years.

Just two weeks ago at the Silicon Valley Conference for Women, Clinton told Re/code’s Kara Swisher that she carries around both an iPhone and a Blackberry. “I don’t throw anything away, I’m like two steps short of a hoarder,” Clinton said. “So I have, you know, an iPad, a mini iPad, an iPhone and Blackberry.”