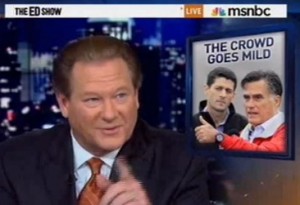 Earlier today, we brought you Morning Joe host Joe Scarborough‘s aghast reaction to the worst bit of campaign enthusiasm optics since Fred Thompson begged a living room full of donors for a round of applause. In the interest of fairness and balance, and to illustrate the contrast between Scarborough and the most raw liberal at MSNBC, we now present The Ed Show‘s Ed Schultz reveling in Mitt Romney‘s awkwardness, actually playing the clip twice, and noting that Romney’s “got an ego bigger than Asia.”

Yes, Governor Romney, but can it put the lotion on it’s skin?

The crowd ignored Romney like he was every song that isn’t “Freebird” at a Lynyrd Skynyrd concert, except for a magical pixie that only Mitt Romney could see, whom he thanked.

On Tuesday night’s The Ed Show, the man they call Big Ed introduced the clip with more relish than the aftermath of an explosion at a Vlasic factory, saying, with an amused smirk, “You don’t see this very often, crowd reaction that we can play for for entertainment.”

Following the clip, a barely-contained Schultz vividly recapped it, as though he hadn’t just played it. “The crowd goes wild for Ryan, even beginning a chant, so Romney has to get ahold of this thing, get back in the picture,” he said, before asking “Can I see that one more time?”

He then played it again, and offered his services as Romney thought-translator. “Don’t forget, I’m on top of the ticket, it’s me, Mitt,” Schultz said, before deadpanning, “Guy’s got an ego bigger than Asia.”

I’m still not sure if Ed was referring to the continent, or that band I’m always mixing up with the band that sang Roseanna. Either way, that’s a pretty big ego.

There are two reasons I’m highlighting this clip, if I’m being honest. First, it’s because it illustrates what sets Ed Schultz apart from his progressive colleagues in MSNBC’s primetime lineup, his live-wire emotional guilelessness. While Lawrence O’Donnell and Rachel Maddow each exhibit a certain measure of glee or annoyance, depending on the story, it’s always tempered with, in Maddow’s case, a serious-faced devotion to the notion of fairness, and in O’Donnell’s, a dose of insider realpolitik.

Not Ed. He’s the guy you’re pretty sure actually would go up to Mitt Romney at a bar and give him what for, or do a touchdown dance during a presidential debate. As a liberal, it’s fun to laugh along with Ed, or simmer with him, and watching this clip is helpful in understanding the appeal of whatever the right’s equivalent of Ed is, if they have one. Maybe I don’t watch enough conservative media, but there seems to be a certain joylessness to it all, even to Rush Limbaugh.

The second reason is that, if Ed can play this clip twice, so can I. Three times, actually. From The Ed Show: