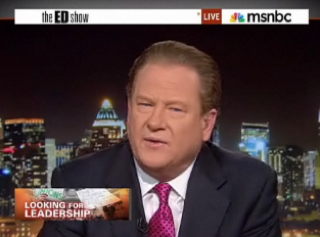 It seems that Libya, Egypt, and Wisconsin may not be the only places where President Obama will need to address a full-on revolt– he’s losing major points with the hosts of MSNBC. First it was Cenk Uygur who took him out to dry for his silence on the Wisconsin union protests, and now Ed Schultz is demanding nothing less than a road trip, though he has the 2008 campaign trail soundbites to back up why he’s being demanding.

“Where are you?” Schultz asked the president during his program on Friday, noting that his following monologue was directed at “the liberal locker room,” where he needed to wake the President from his apparently slumber. “It is day 11 of the protests in Madison and there’s still no deal between the Wisconsin 14 and [Governor] Scott Walker,” Schultz noted, but the White House has been “lukewarm.” “The President has been virtually silent about all of this,” he continued, noting that union workers are “the people who voted for President Obama” and that Senator Obama had promised much more full-throated solidarity than what he is providing. He played a clip from the 2008 campaign trail in which Obama promised to “put on a pair of comfortable shoes” and go on strike with the unions wherever they may protest, followed by a clip of White House Press Secretary Jay Carney responding to that clip by saying the President stood with the workers. “This Carney guy, maybe he just didn’t get the memo,” Schultz quipped.

Schultz  then took a detour to slam Sen. Lindsey Graham for saying further involvement in state issue by the President would be “inappropriate”– “they [Republicans] hate the American workers,” he noted as he implored the President to ignore them and go on a “road trip.”

Schultz believes the President is deliberately ignoring the unions– after all, what other pressing issues could be occupying the President’s time that are more important than a ragtag group of state senators shacking up in a hotel somewhere? Surely there can’t be anything going on in the Middle East right now that would require much time and effort from the executive– it’s not like northern Africa is experiencing a series of historic revolutions that have left hundreds dead and threaten to swallow up the world’s most oil-rich nations. Nor would the President be hampered domestically by the federal financial situation and the fact that Republicans keep threatening to shut down the entire federal government. Surely President Obama must be twiddling his thumbs while Wisconsin burns, if by “burns” you mean “experiences a series of peaceful protests in which union members walk around in circles for a while and the governor gets prank-called by shock jock talk radio hosts.”

Schultz addresses all of these possible critiques by merely mentioning that “Libya is going to hell in a handbasket,” but then adding that Wisconsin is, too. It’s a weak retort to the possible response. But all in all Schultz’s attempt at shaking the President out of what he perceives to be political slumber is earnest and attention-grabbing, and sure to be a hit among people who find Schultz’s “working class” style to be approachable, if not preferable in small doses.

Schultz’s union monologue via MSNBC below: