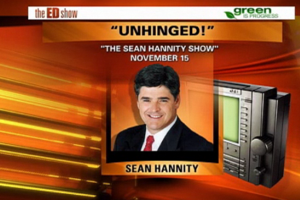 For a primetime Fox News anchor whose rhetoric is as sharp as his ideology is rigid, Sean Hannity seemed to avoid the intra-media crossfire quite handily. Sure, he’ll get a stab here, a “Worst Persons” there, but rarely does he get into long-term feuds or become the subject of an energetic campaign against him. Herein a clip that could change that all, should Hannity take the bait: Ed Schultz steps up to bat with a montage of Hannity clips to boil the blood of any dyed-in-the-wool liberal.

Schultz made Hannity the star of his daily “Psycho Talk” segment– not the first time Hannity lands there– and tackled his assertion that President Obama was “losing it,” “obsessed with Fox News,” and hated Vice President Joe Biden. Hannity had noted on his radio program that he knows this because his “sources are reliable.”

Schultz tore into Hannity’s comments in a way he rarely does: with a montage of clips showing Hannity saying untrue things– from the $200 million a day Persident Obama was supposed to have spent in India to several other questionable accusations– concluding that “in terms of having reliable sources, Hannity isnt exactly Woodward and Bernstein, is he?”

Schultz tends to more often than not punch up at Fox News superstars like Glenn Beck and Bill O’Reilly— people with way too many feuds on their hands to bother indulging him. Hannity, by virtue of having the same level of influence without the constant back-and-forth with others on the left, is a far more intelligent target for Schultz. Hannity does have the time to bother with him, and if he does, this could become the kind of symbiotic feud that could give both of them the relevance they’ve been craving, and cable news addicts an unexpected novelty feud to break the years-long Olbermann-O’Reilly malaise.

The video from Friday’s Ed Show via MSNBC below: