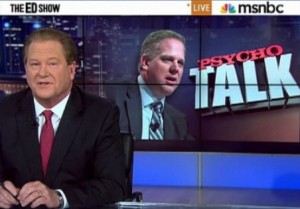 Glenn Beck‘s time as a daily host on Fox News is almost over, but that doesn’t mean he’s lost his touch for saying controversial things that infuriate his critics. Ed Schultz noticed a “dangerous” segment on Beck’s show, which given Beck’s vague use of language, possibly could have some unintended implications.

Before introducing the Beck segment, Schultz warned his viewers:

“Glenn Beck has less than three weeks left to spew his nonsense on Fox News. . . . The Beckster telling as many doomsday stories as he can come up with, but last night things went way too far.”

In the segment, Beck discussed a desire by President Obama to create a national gun registry and Obama’s attitude generally on Second Amendment rights:

“This will do nothing but make it harder for you to get a gun. Why would you get a gun? (pointing at a picture of President Obama) To prepare for tough times. That’s why.”

Schultz described the behavior of urging viewers to get a gun and pointing at Obama as being “unacceptable and being a first-class idiot.” Such “violent rhetoric” is proof, in Schultz’s view, that Beck has learned nothing from all the recent violence.

From Beck’s point of view, he likely was suggesting the need for a gun either because Obama will make it much more difficult to get a gun in the future or because Beck predicts Obama’s policies will end up leaving all individuals forced to fend for themselves in a dangerous economy. Although given Beck’s hyperbolic statements and dramatic pointing at a photo of Obama, the most dangerous thing for Beck is that he makes it very easy for his critics to conclude that his words suggest the most ludicrous ideas. Was Beck suggesting that people get a gun to take violent action against Obama? I think it’s clear that he was not, however I’ll admit, Beck’s use of vague words and non-specific warnings in this instance are a bit harder to defend.